Print Out Your Own Camera With the Rubikon 2

Got some glue, scissors, and a cold winter's day? Why not build your own pinhole camera? 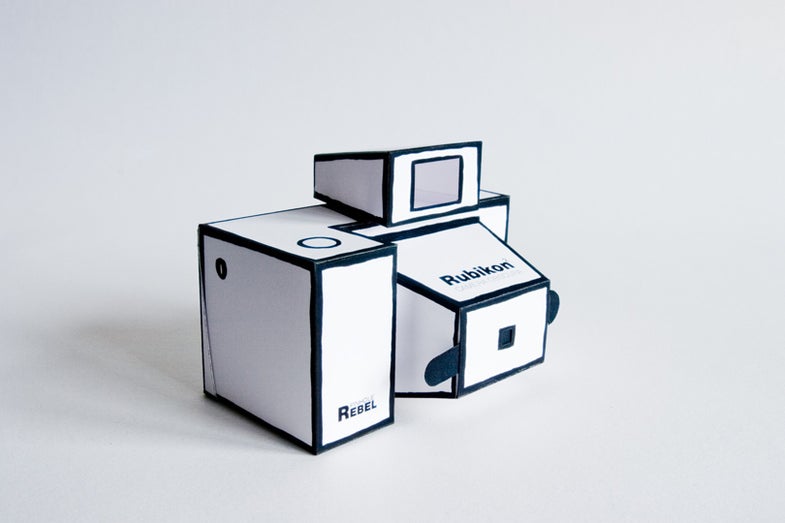 Homemade pinhole cameras are nothing new, and there are dozens that you can make at home using just a little ingenuity and some spare parts. The Rubikon 2, by Czech artist Jaroslav Juřica is worth checking out for its simplicity — you need little more than paper, scissors and glue to make a fully functioning pinhole camera.

Released under a Creative Commons license in 2010, the Rubikon 2 is a modern update on the classic Dirkon paper camera that debuted in the 70s (and people still use). Do build the Rubikon 2, all you need to do is follow the instructions on a PDF, print it out on thick cardstock, and go at it with scissors and glue. Unfortunately, there is a tiny bit more hardware that you need: an empty film cassette, ruler, a paper clip, and an optional flat bit of thin metal for the aperture. All stuff that’s pretty likely just to be lying around junk drawers around the house.

The camera even has included exposure instructions, which will help with the eternally nebulous question of how long to keep the lens open for. You take a light reading using a light meter or modern camera at f/22, and then adjust the exposure time according to a chart on the Rubikon’s back. And as for the photos? They’re as soft and dreamy as you’d expect from a pinhole cameras.

It’s a perfect craft project for a cold winter’s day, when the world simply looks too miserable to go outside in.