Luxi Kickstarter Will Turn Your iPhone Into an Incident Light Meter

With a clip on accessory, your iPhone could become an invaluable part of your photography kit 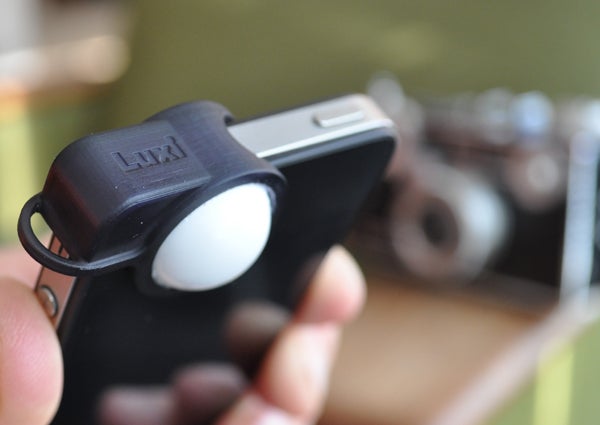 At one point, knowing how to use a hand-held light meter was an essential photographic skill. Now, cameras have very decent built-in meters and the stand-alone units still costs hundreds of dollars, making them less and less common. However, a new Kickstarter project is aimed to make the light meter far more affordable — by giving you a clip-on adapter for your iPhone.

Luxi is a clip-on lightmeter for the iPhone. It’ll slip over the front facing camera of your device, and allow you to gather accurate exposure information for specific points in the scene. Then you use a free app to measure the amount of incident light, and base your camera’s settings off of that. And, perhaps its best feature, is that it’ll only set you back $19 (or even $14 if you’re an early backer).

It’s not immediately clear how the Luxi works. If I had to guess, I imagine that the white plastic bubble diffuses the light evenly enough for the iPhone’s camera to get an accurate fix on it. The Luxi will initially only be available for the iPhone 5, but the developer has made prototypes for the iPhone 4/4S, and if there’s enough demand, will sell those too.

Project creator James Flynn has previously run a successful Kickstarter for a headphone/microphone splitter which shipped soon after the funding was complete. If nothing else, that at least means that he’s been through the Kickstarter process before, and hopefully is able to deliver the goods in a timely manner.