How Do Astronauts Capture Sharp Images at Night?

Capturing a stable image when it's dark out is hard — getting the shot when orbiting above the Earth and traveling 17,000 MPH is something else entirely. 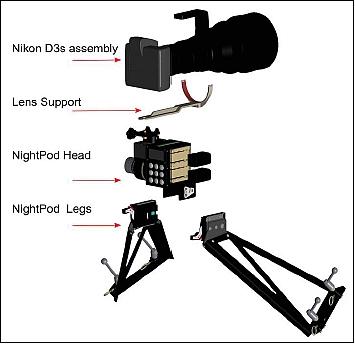 It’s no secret that we love space photography here at PopPhoto.com, due in no small part to images like the ones from Commander Chris Hadfield. But how in the world to they get those incredible shots of cities at night, when they’re shooting in the pitchest black imaginable, thousands of miles above the planet? It turns out it’s thanks to a gadget called the NightPod.

The NightPod is a specially designed stabilization rig, specifically crafted so that cameras on the ISS can be used to track stationary targets (notably cities) at night. The shot of Liège, Belgium was captured using a Nikon D3S, a 180mm lens, and the NightPod for stabilization. The way the NightPod works is that the astronaut enters the station’s current orbit, and the motorized mount is able to track stationary objects on the planet’s surface below. It functions over the period of six hours, letting the astronauts set it, and go about their other work. Installed in February of last year, it has been used to capture some incredible images, like this nighttime shot of Riyadh taken with a 400mm lens.

With the ISS hurtling through the skies at some 17,000 mph, the NightPod is right now a one of a kind creation, designed specifically for the extreme conditions of the satellites. However, the astronauts are already planning ways to play with this incredible piece of hardware, and are considering turning it around, and aiming it at the stars. But even pointed still at the Earth, the photos that it takes are still powerful.

Astrophotographers based on Earth have to use a similar mechanism in the form of an equatorial mount, which accounts for the rotation of the planet below us, so that stars can be captured without blur.