With fewer than 1,000 of this unusual lens ever produced, its manages to produce images radically different from even other fisheye lenses 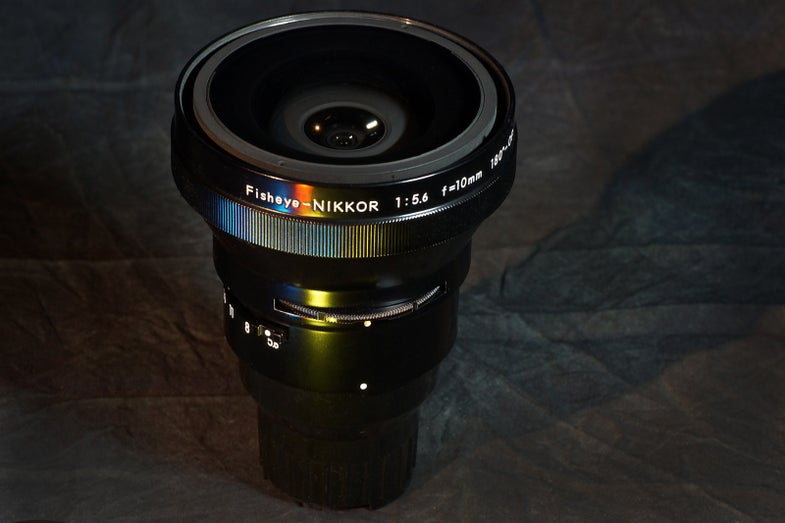 You might be wondering why this 10mm f/5.6 Nikkor fisheye on eBay is commanding such a high price. Aside from its age, why in the world would an old fisheye go for $49,000, when a new one only fetches $775? But it turns out that the 10mm f/5.6 is anything but an ordinary lens.

This lens was only produced by Nikon for eight years, from 1968 to 1976, and even then was extremely uncommon — fewer than 1,000 were ever made (possibly even much fewer, one website cites just 78 were produced.) Not only that, but the 10mm was a specially designed lens that uses Orthographic Projection (OP) rather than Equidistant Projection, making it one of the first SLR lenses to do so. Perhaps even more importantly, it’s allegedly the first aspherical SLR lens ever produced.

By using OP, the fisheye like effect is emphasized even more than normal. With its 180° field of view, central features were expanded and edges squished even more than usual. That said, even with its fairly slow maximum aperture, the lens is very bright, and there’s almost no light dropoff at the edges of the lens, which made this lens useful for scientific purposes — such as brightness measurements. It could also be used for architectural work to analyze the amount of illumination in an area. If you’re interested in how any of that works, there’s an excellent technical rundown of the lens on Mir.com.

Even more bizarrely, the lens extended so far back into the body of the camera, that it required the mirror to be locked up at all times, limiting the number of cameras it could be used with. Since that meant that you couldn’t see an image through the viewfinder, it required a separate external viewfinder — seen here — the DF-1. There was even no focusing mechanism on the lens, it was permanently set to infinity.

It’s a bizarre and wonderful piece of lens history, and here’s hoping someone that will really know how to use it ponies up the $49,000 to give it a new home.