By combining a see-through screen and Live View, you get more than a 100% field of view 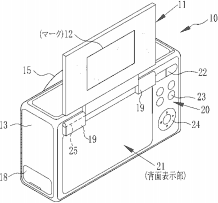 Transparent LCDs are a piece of technology that have popped up on the tech scene in the last couple of years. While companies like Samsung are working on creating crazy screens, Nikon has created a patent to use it as an augmented Live View for their cameras. As spotted by Egami and Nikon Rumors, the patent is for a flip-up semi-transparent LCD that can overlay a heads-up display over real life, combining digital and optical.

In the camera equivalent of augmented reality, this hinged LCD could allow for information to be relayed over the top of an optical view. It could also allow for more than 100% of the frame to be shown at a time — letting you to see what’s going on before things enter frame. It’s pretty common for rangefinders to show what’s beyond the field of view. It would be especially useful with a zoom lens.

This isn’t far removed from the concept behind Fujifilm’s hybrid viewfinder, which garnered such wide acclaim.

As great of an idea as this could be, remember that companies patent a lot of things that never come to market. We might never see a translucent LCD screen from Nikon, but it would be pretty cool if we did.