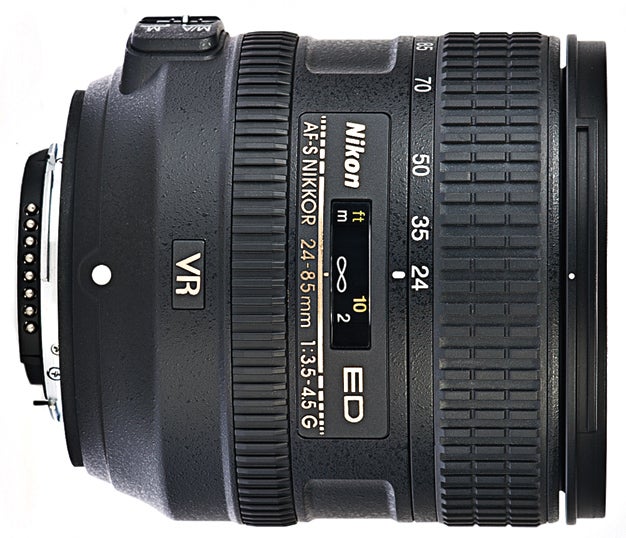 Launched in June 2012 and now a kit lens for the Nikon D600, this full-frame 24–85mm f/3.5–4.5G AF-S ED VR ($597, street) is Nikon’s third version of its 24–85mm lens and the first with Vibration Reduction. It has one element of expensive low-dispersion (ED) glass, three aspherical elements, a weather-resistant O-ring around the lensmount, Nikon’s SWM autofocus motor, and the M/A “manual-priority” mode that allows for manual-focus touchup when the lens is set to autofocus.

The build is excellent, the surfacing attractive, and turning actions for the focus and zoom rings are smooth, even, and slop-free. AF? Quiet, accurate, and fast. Weighing just over a pound, the lens is light and fairly compact. (It casts a shadow from the D600’s pop-up flash only at the widest focal length and closest subject distance.) Its nonrotating barrel takes 72mm filter-ring accessories.

On our optical test bench, it delivered Excellent-range SQF numbers for sharp and contrasty images. (Oddly, its numbers averaged slightly below those of the previous 24–85mm AF Nikkor.) In our DxO Analyzer 4.1 tests, it produced Visible-range distortion at all three tested focal lengths (barrel at 24mm, pincushion at 50mm and 85mm), high by today’s standards. Still, these numbers beat its predecessor by more than a factor of 2. (To compare, Canon’s discontinued 24–85mm f/3.5–4.5 scored better for sharpness, but had off-the-charts Very Visible 2.9% barrel distortion at 24mm.)

The new Nikkor’s vignetting control—falloff until f/5.6 at 24mm and 85mm, and none at 50mm—also handily beat the previous version. Its 1:3.63 maximum subject magnification was about the norm for kit lenses. So was VR: At 85mm, our testers averaged 2.5 stops of extra handheld shooting.

This versatile zoom is wide enough on full-frame bodies for group shots and tight interiors. It scales up to 36–128mm on Nikon’s DX (APS-C) bodies for wildlife and stadium sports on the long end.

By kit lens standards, the price may seem high. But it costs nearly $1,300 less than Nikon’s 24–70mm f/2.8, an arguably comparable lens that’s also twice as heavy and offers no VR. So to us, $600 seems pretty reasonable.