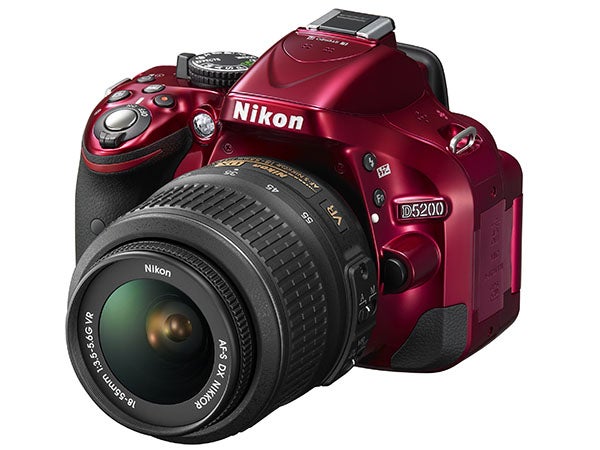 Lately, the full-frame D600 DSLR has been getting most of the love in the Nikon family, but now there’s a new mid-level option in the form of the D5200. At its heart is a 24.1-megapixel DX-format CMOS sensor coupled with the Expeed 3 image processor found in higher-end Nikon DSLRs. That boosts the maximum ISO setting all the way up to an equivalent of 25,600.

It has 39 AF points in its revamped focusing system and relies on the 2,016 pixel sensor responsible for metering in more advanced Nikon cameras. Its maximum burst rate hits 5 FPS continuous and the live view switch is now located near the mode dial to make switching over easier and less likely to happen by accident in your bag.

The Vari-angle screen has stuck around, bringing with it 921k-dots packed into 3-inches of display real estate. The hinge is on the side, so the monitor can now be flung around in any direction, even when it’s on a tripod.

While the D5200 doesn’t have much in the way of built-in wireless connectivity, it is compatible with the WU-1a wireless adapter, which lets it transmit images to mobile devices. It can also use the new WR-R10/WR-T10 electromagnetic remote controls. The wireless remote can even be used to activate AF and movie modes when paired with the WR-R10 adapter.

Initially, the D5200 looks to be a serious upgrade in just about every aspect over the previous D5100 and that’s what we like to see. Unfortunately, there’s no official pricing or release date information yet, so we’ll have to wait and see if those spec bumps come with a heftier price tag.