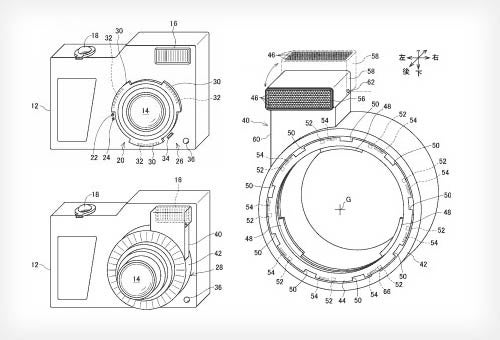 One of the biggest upsides to many compact cameras is how close they’re able to focus without any of the fussing that can be involved with macro photography on larger cameras. So, if Nikon’s patent for a ring light adapter ever comes to light, it could make close-up photography even simpler.

The add-on seems to work much like bigger ring light adapters, such as the Ray Flash or the Orbis, which are meant to be used with DSLRs and Speedlites. An adapter snaps over the built-in or pop-up flash and redirects the light from it to a ring that sits around the lens.

It’s a bit different than the circular array of LED lights surrounding the lens of Pentax’s WG-series rugged cameras, but the intent is basically the same.

If you’re dreaming of getting that glowing ring-light portrait look out of it, you’ll likely be disappointed, as a ring light this small will likely leave your portrait shots looking much like they were taken with the normal built-in flash. But, it would help prevent red-eye and give your subjects a slightly more interesting catch light if you’re close enough.

Again, this isn’t a real product yet and may never actually become one, but it is a glimmer of hope for compact cameras in general. The obvious drawback, though, is that the adapter would have to be custom-made for a specific camera and if the body changed, it would become useless. Camera companies haven’t forgotten about you, little guys.