Ever wanted to plug your lenses into your computer using a USB port? Now you can. 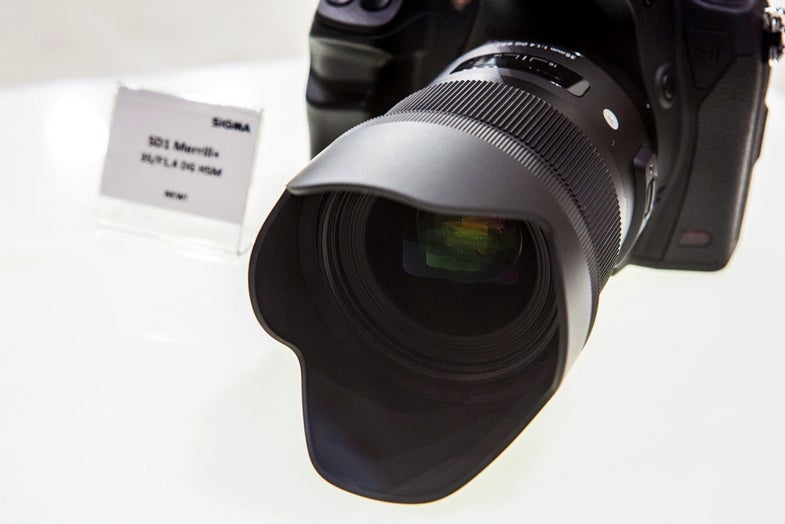 Sigma used the 2012 Photokina as an opportunity to announce a couple different initiatives, but the main focus is still obviously on the lenses. Here’s a rundown of the new glass followed by some of the other stuff they’re talking about here at the conference.

We really, liked the 85mm F/1.4 a lot, so we were very happy to hear that a new 35mm addition was coming to the party. In a demo we saw here at the show, they demonstrated just how well they’ve been able to combat chromatic aberration, which can run rampant in fast, wide lenses.

If the focal length sounds familiar, that’s because this is actually an update to an older lens. It’s meant to work on APS-C bodies and has a full-frame equivalent formal range of roughly 25.5-105mm. We didn’t actually get to handle it, but it looks relatively compact in its case, so hopefully it will be lighter than the previous model as well.

This massive lens is another update of an old model, which was released in just 2011. We’re looking forward to getting it in the lab to see how much they’ve been able to improve the image quality.

The idea of plugging a lens into a computer using a USB port might sound kind of weird — it does to me at least — but Sigma’s new Optimization Pro software allows for. Once your lens is plugged into the computer, you can give it the latest firmware, but more importantly, you can also tweak the focus parameters of the lens itself. Pretty cool extension of the micro-adjustment feature offered on some DSLRs.