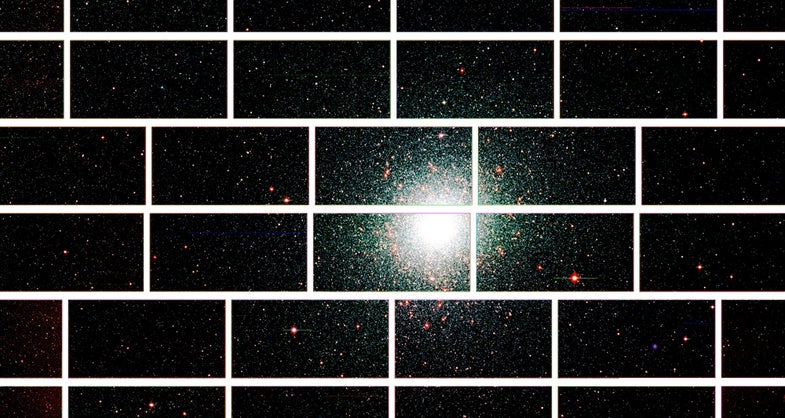 Zoomed-in image from the Dark Energy Camera of the center of the globular star cluster 47 Tucanae, which lies about 17,000 light years from Earth. Credit: Dark Energy Survey Collaboration.
SHARE

With an array of 62 CCD sensors, grabbing 570 megapixel chunks of the sky, the Dark Energy Camera is the most powerful digital camera currently in existence. It was recently activated as part of the Dark Energy Survey in Chile, and the first images have now been released into the public eye.

It took eight years of planning and building to get the Dark Energy Camera up and running, and on September 12th, it took its very first picture. The images that are being released are frankly astonishing.

In a world where gigapixel images are increasingly common, what makes this 570 megapixel behemoth worthy of the crown of “most powerful”? Because it’s also incredibly sensitive:

The survey is set up to try and analyze why the expansion of the universe is speeding up, and starting in December (after the camera is fully tested), a five year study will begin, surveying “one-eighth of the sky, or 5,000 square degrees, to discover and measure 300 million galaxies, 100,000 galaxy clusters and 4,000 supernovae.”

As impressive as this telescope is, there’s something even more impressive in the works. The The SLAC (Stanford Linear Accelerator Center) National Accelerator Laboratory is working on the Large Synoptic Survey Telescope camera, which will grab 3.2 gigapixel images, which will be released to the public. Construction of that behemoth is hoped to start in 2014.