Can you imagine a lens where each element was completely flat and just nanometers thick? 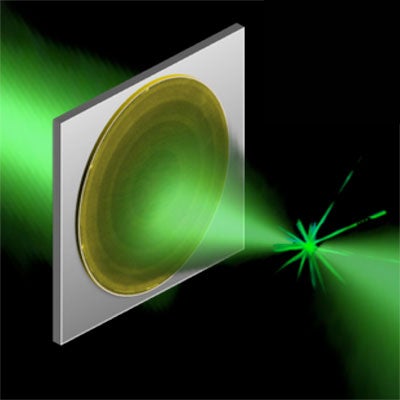 A group of Harvard physicists have created a new type of lens, smaller and thinner than anything we’ve ever seen before. Rather than a curved piece of glass, this discovery is just 60 nanometers thick, and completely flat. In a paper published in Nano Letters, these lenses are explained. The researchers create them by taking an incredibly thin layer of silicon, and plating it with a nanometer-thick layer of gold. This gold is then stripped off, leaving behind tiny v-shaped structures. When light hits these structures, it’s captured briefly, then released in a slightly different direction, mimicking a traditional lens.

Not only is this potentially orders of magnitude thinner and lighter than current lenses, but also might deal with many of the chromatic problems we associated with standard optical lenses:

However, this is a long way from being on a camera. Currently, the lens is described as being “completely scalable, from near-infrared to terahertz wavelengths.” Visible light is at the high end of the terahertz frequency, running 400–790 THz. Some of the discussion of this lens indicates that it might only work at a single frequency band, limiting it to just one color (though using three-color processing with multiple lenses might work around that). It also only has 1% efficiency right now.

As heavy as those caveats are, give it 10 years to work the kinks out, and you might that all your lenses are pancakes.