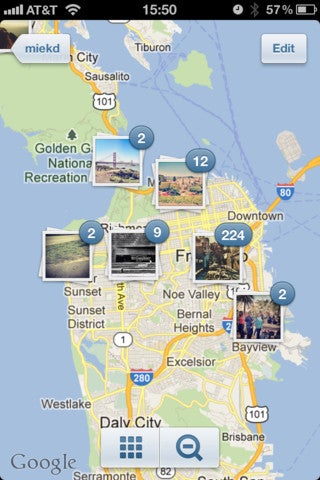 The wildly popular smartphone app Instagram has just reached the milestone of version 3.0, adding new features and bug fixes. There are some changes to the user interface, like the addition of infinite scrolling, and some speed tweaks, but the major new feature is photo maps.

Detailed in the video below, photo maps takes the geotagged images from your phone, and puts them together on a map, broadcasting your travels to the world.

While Instagram continues down the path of major success, one of the major names in the iOS lo-fi photography world is having the opposite luck. Hipstamatic significantly predates Instagram, and was arguably responsible for the original lomography boom on the iPhone. However, it cost a buck and didn’t nail the sharing aspect like Instagram does, so it was relegated to the back seat.

Now it appears that Hipstamatic has laid off almost its entire team, and reduced down to a skeleton crew of just five employees. Apparently, the app wasn’t bringing in enough revenue to cover the team as it was. It’s not clear where things are going from here, with Hipstamatic offering the following statement:

We’ll see if the once prominent app can keep itself going with such a small team, and what this’ll mean for future developments from the developers. It’s especially sad in light of the upcoming Photojournalism Foundation they were promising and a couple high-profile publishing partnerships.