With an array of almost 100 smaller sensors, the technology behind this camera could theoretically be scaled up to 50-gigapixels 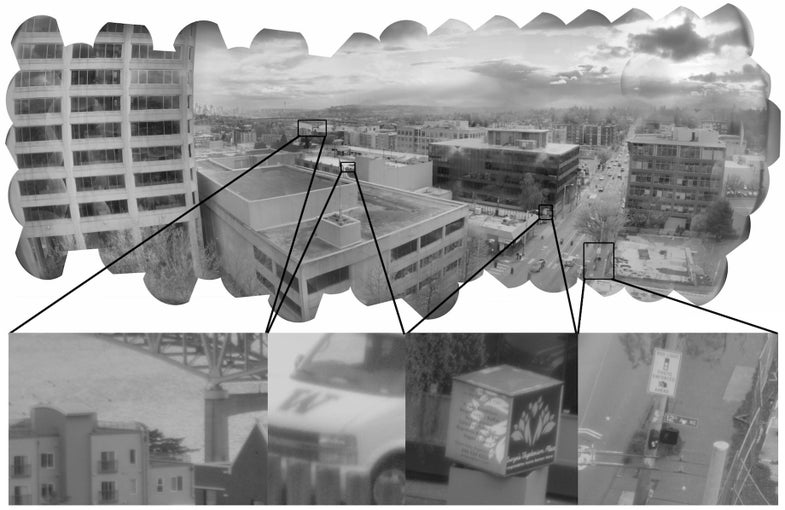 Gigapixel photography is hardly a new field, after all we’ve been seeing gigapixel images coming out for the last few years. But a new piece of hardware from Duke University could be a very important step towards making gigapixel devices that aren’t just one-off, specially created tools. The camera, dubbed AWARE-2, is described in this week’s issue of Nature, and stitches together these enormous photos by using an array of 98 14-megapixel microsensors, all absorbing light from a single lens with a 16-mm aperture.

The camera itself is pretty big right now, 75x75x50 cm (30″x30″x20″), a size required to keep the circuitry cool. It also snaps a relatively sedate three frames per minute. So it’s big, ungainly, slow, and right now only shoots black and white. Why is this so special? Because it represents a step towards proper, commercial gigapixel cameras. This design manages to sidestep some of the imaging abberations that plague large-scale photography. The team is already planning a 10-gigapixel color version, and then a 50-gigapixel one.

With a system that’s scalable like this, the inevitable march of shrinking components could mean that it will only take a couple of years before an offspring of this design becomes small enough to be in a commercial device — and hopefully at a commercial pricepoint.