Ricoh may be working on a lens cap that can protect your lens if dropped, and will automatically open and close. 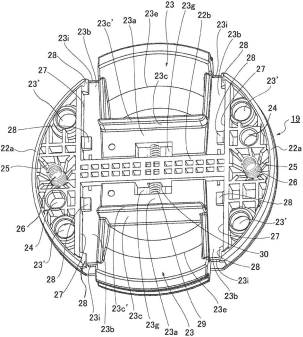 The basic design of the lens cap has remained mostly unchanged for years — but a new patent filed by Ricoh in Japan just might make things a bit more interesting. Spotted by Japanese site Egami, this new cap would have two features that differ from what you generally find attached to your glassware.

The cap will have a built in impact zone to absorb force, protecting your lens from direct pressure. From the diagrams, it looks like there’s just a little bit of give in the cap, so not every bump and jostle is applied directly to the front element. I don’t know if it would be enough to protect from a major fall, but it’s a step in the right direction.

The second feature is described as “automatic opening and closing,” and unfortunately, without a better translation, it’s hard to understand what that actually refers to. Maybe when you power on the camera, a lens element moves and automatically pops of the cap, or perhaps a way of removing it without requiring you to pinch it off. If any of our readers are able to offer a better translation of the original Japanese and let us know what it would actually do, that’d be great.