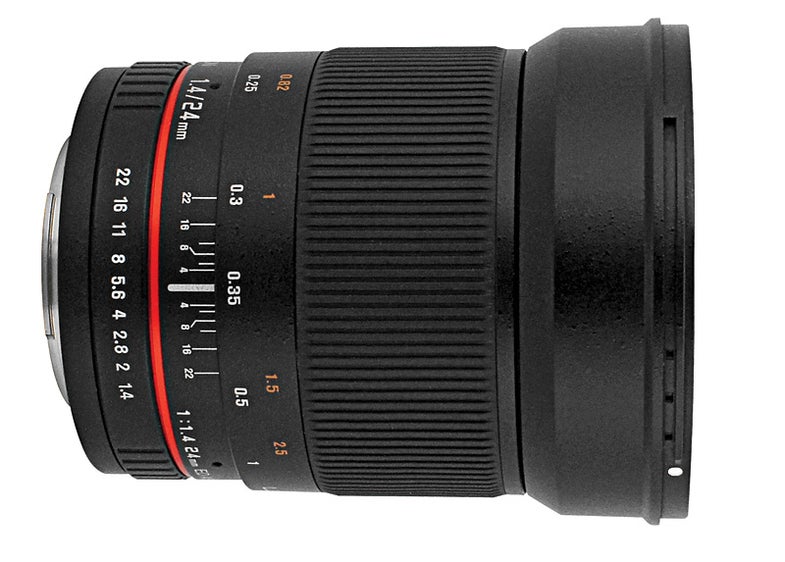 Joining the 8mm, 14mm, 35mm, and 85mm manual-focus, full-frame Rokinons, this 24mm boasts the highest street price ($699) in the line by far. Like Rokinon’s 35mm f/1.4, it provides no electronic communication between camera and lens, requiring users to open the aperture to its widest setting for composing and focusing, then stop down to the working aperture to make the exposure. The good news? Your camera’s aperture-priority autoexposure mode will work—after a fashion.

A little lighter in weight, the Rokinon 24mm is about the same size as its two most comparable tested competitors, the Canon 24mm f/1.4L II USM ($1,661, street) and Nikon 24mm f/1.4G ED AF-S ($1,999). The Rokinon offers robust construction, an attractive finish with a matte-black stippled surface, and easy-to-read markings.

As befits an MF-only lens, the focusing ring is generously sized, very smooth- and long-turning for extremely fine focusing. Another important feature is its easily legible depth-of-field scale for the full aperture range—very handy for scale-focusing and especially useful in dim light. (Our staffers had difficulty focusing this lens in dim light, despite the bright viewfinder image—ironically, the exact situation in which you would reach for an f/1.4. However, this probably had more to do with our camera’s focusing screen than the lens itself.)

On the Popular Photography optical bench, the Rokinon turned in excellent sharpness and contrast numbers, with results almost identical to those of the Canon 24mm f/1.4 and slightly better than those of the comparable Nikon.

In DxO Analyzer Version 4.1 tests of distortion control, we found Visible-range barrel distortion (0.36%)—a strong performance by historic standards, but not strong enough to beat the Canon or Nikon, both of which landed in the Slight range. On the other hand, the Rokinon’s maximum subject magnfication of 1:4.84 bested both. As for edge vignetting, the Rokinon’s f/4 fell somewhere between the Nikon’s f/5 and Canon’s f/2.

While expensive by Rokinon standards, this lens is still much more affordable than other 24mm f/1.4 options. If $700 is your lens budget for the year, and you’re comfortable with manual focus and manual stopdown, this Rokinon can transport you to the thrilling, rock-your-world thrills of f/1.4.