This high-speed research camera can clock 1,380 fps at full resolution 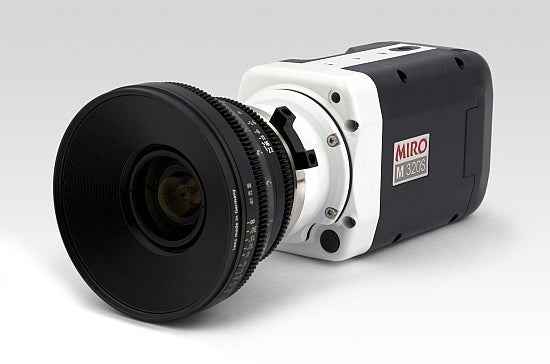 Designed for scientific research and video production, the newly announced Phantom Miro M320S is built for speed. The camera has a maximum resolution of just 1920×1200, which may seem miserly in the days of high megapixel cameras, but makes up for that with a ludicrous frame rate. At fulls resolution, it can pull down 1,380 fps. As you increase the framerate, the resolution starts to drop, but you can still manage 1920×1080 at 1,540 fps. Going down the line, it can do 1280×720 at 3,280 fps, all the way down to 128×8 — yes, just eight pixels tall — but with the jaw-dropping speed of 325,000 fps. It’s not quite as insane as the 1,000,000 fps rates achieved by some of Phandom’s other cameras, but it’s enough to stretch a single second out to roughly three-hours if played back at the standard 30fps rate. That’s seriously slow.

The Miro M320S comes configured with 3GB, 6GB, or 12GB of internal RAM, but is also compatible with Vision Research’s CineFlash storage system, which holds up to 120GB — or you can link in directly over ethernet. That high speed footage takes up a lot of space, and at the highest speed, you can only grab 2.3 seconds of footage. The camera can also be configured with either Canon EOS, Nikon F, 35mm PL, or C lens mounts. There’s no word on price, but given that the camera is targeted at the scientific and entertainment markets, you can bet it won’t be cheap.