A record haul of 400 million yuan (US$63.5 million) in smuggled photographic equipment has been intercepted by Chinese authorities 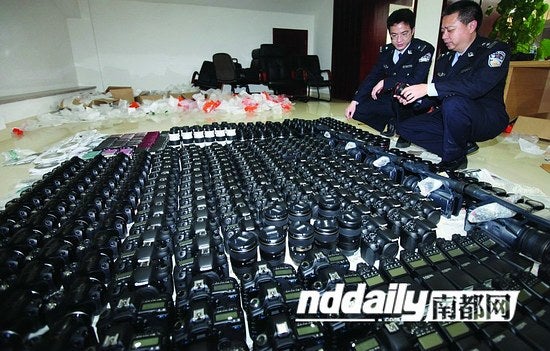 Chinese customs agents have busted a smuggling ring charged with bringing gear from Hong Kong to Guangdong — gear worth an estimated 400 million yuan (US$63.5 million). 14 suspects have been arrested in the sting, and the operation is alleged to have already transported more than 60,000 cameras, as well as 13,623 professional and consumer lenses, 483 flashlights, and 1,025 video cameras.

The smugglers took the gear from Hong Kong to Macau, where it was driven to Zhuhai city, and then transported to clients in Guangzhou, Beijing and Shanghai. This gear seems primarily destined for the grey market, as photographic equipment is markedly less expensive in Hong Kong than mainland China — a 5D Mark II will cost you US$1,854 in Hong Kong, but US$2,418 when off the island. By buying the goods legally in Hong Kong, and then smuggling them, the ring is able to avoid paying customs tax, and still sell below market price and make a profit.

The smuggled gear seems to be primarily DSLRs, including Nikon D5000s, Canon 5D Mark IIs, as well as pro-level camcorders, lenses, flashes, and a variety of compact cameras. According to the report, also seized were Porsche and BMW cars, as well as 50 million yuan (approximately US$8 million) in cash