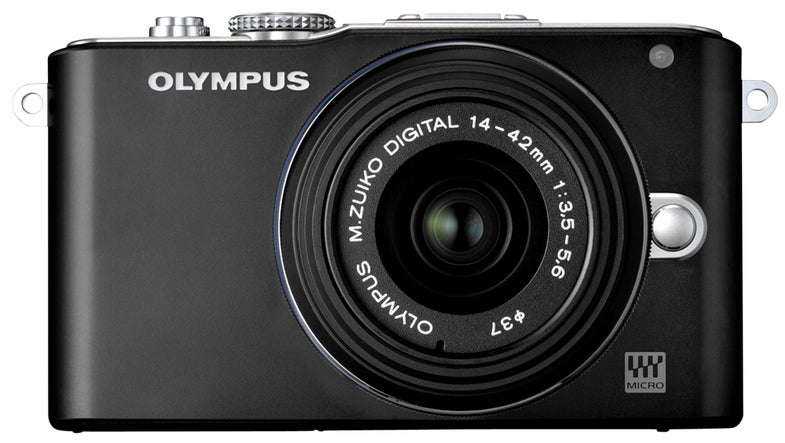 While we very much like the ILCs Olympus has made so far, we think that it's time for the company to step up to a sensor with more resolution to remain competitive with Panasonic and Sony.
SHARE

We’ve been fans of Olympus’s PL series of Micro Four Thirds cameras from the start, and the midlevel Pen E-PL2 was among our favorite cameras when it came out last year. Its successor, the E-PL3 ($700, street, with 14–42mm f/3.5–5.6 II m.Zuiko MSC Digital ED lens), adds a swiveling LCD screen, greater low-light sensitivity, and upgraded processing in a more compact body.

The PL3 performed quite well in our lab tests and should please most shooters who aren’t looking for pro-level performance.

In the Test Lab
The main limiting factor on the PL3’s overall Image Quality rating is its resolution. That’s not to say that it’s bad; with 12.3 megapixels, the PL3’s LiveMOS sensor turned in 2230 lines per picture height at its lowest sensitivity (ISO 200) in our resolution test. Since our rating scale is wide enough to include cameras that have twice as many pixels, the fact that the PL3 landed toward the top of the Very High rating band (which runs from 2000 to 2249 lines) says good things about this camera.

Panasonic’s Lumix GX1 is tougher to compare, due to its software’s noise reduction defaults for RAW conversion. But using the GX1’s JPEG results—which fared better in noise than its RAW images did in our February test—the Panasonic had more resolving power at all ISOs, while the Olympus produced less noise from ISO 200 through 3200. Though both cameras yielded Unacceptable noise at higher ISOs, the Panasonic’s numbers were slightly better here.

The PL3 achieved an Excellent rating in color accuracy, as is usually the case these days.

In the Field
The PL3’s body feels solid and should stand up to the rigors of use. But unlike its larger predecessor, it has no grip whatsoever on the front side of the camera. For this reason, some photographers might want to move up the line to the very ergonomic new flagship, the E-P3 (though you won’t find an articulated LCD monitor in that model).

The PL3 lacks the P3’s touchscreen, though we didn’t find ourselves missing it that much. Ultimately, the PL3’s tilting LCD proved more welcome: It made framing odd angles simpler and allowed us to compose while looking downward, as you would with a waist-level viewfinder.While this may just seem like a throwback to a bygone era, a waist-level finder provides a nice way to disengage from the scene you’re shooting. By doing so, you can be more analytical about your shot and be more considerate of composition.

A major reason we don’t miss the touchscreen? The PL3 offers direct access to controls, including autofocus area selection, through the navigation pad. A single function button (as well as the red video-record button) can be assigned to one of 15 controls or turned off entirely. A control panel on the LCD that is reached by pressing the center OK button on the navigation pad lets you change most shooting settings.

By ILC standards, focusing was fast in bright light, but it slowed noticeably as the light grew dim. In very low light, the camera sometimes failed to achieve focus; in these cases, we appreciated the AF + MF option that lets you take over focusing manually by turning a ring on the lens. As usual with Olympus ILCs, you can turn on MF assist in the custom menu, and the camera will zoom in on the selected AF area when you turn the focusing ring.

The continuous focus was able to keep up with many subjects in bright light, but in moderate and low light, faster-moving subjects may pose a challenge. This is true for both still and video capture. In a relatively dim living room, the PL3 had a hard time keeping up during video of a slow-moving mechanical toy.

Otherwise, the video was pleasing, with little in the way of artifacts. Colors were also well saturated and the footage sharp—when in proper focus.

Burst shooters will likely be pleased with the burst speed of 4.1 frames per second, though we only got about 6 frames per burst before the buffer filled up (we used a SanDisk Extreme Pro 16GB SDHC 45MB/s UHS-I). When filled with six RAW+SuperFine JPEGs, the buffer took about 10 seconds to write to the card, though the camera will continue to shoot frames as buffer room frees up.

The Bottom Line
If you don’t mind its lack of a grip, the PL3 will likely appeal to you. While you can’t expect the same level of AF tracking or burst speed that a pro-level DSLR would give you, for everyday shooting this camera will provide image quality and AF speed significantly better than you’d get with most compacts.

Snapshooters looking for an even smaller and less expensive Olympus might be better suited to the new Pen Mini (aka the E-PM1, $500, street, with the same lens). Sharing most of the guts of the PL3, it should yield similar-quality images (see sidebar). While Panasonic’s GX1 does beat the PL3 in some ways, it’s also more expensive ($800 with an equivalent zoom lens).

And if the viewfinder gives you a reason to consider Panasonic’s GF3, it’s worth noting that this Olympus has a hot-shoe that allows you to add an electronic viewfinder or one of the company’s other fun, useful accessories, such as the PenPal for sending photos to Android or Blackberry phones (sorry iPhone users, the PenPal won’t work for you). The PL3’s tilting LCD also gives it an edge over the GF3.

So for shooters who value both style and function, the Olympus Pen E-PL3 could be the right ILC. But photographers who obsess over grips and crave power will likely gravitate toward the Pen E-P3 or the Panasonic Lumix GX1.