A serious compact cleverly disguised as a rangefinder 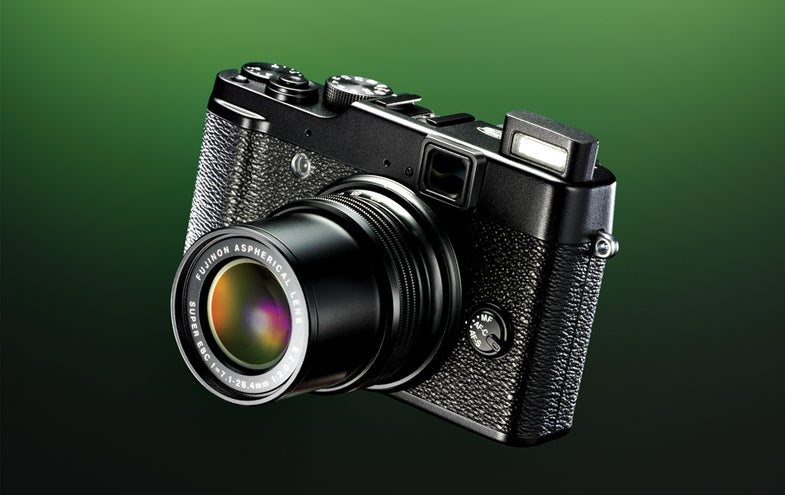 Fujifilm hit its stride last year with the debut of the FinePix X100, the first model in its X-series of rangefinder-style advanced compact cameras. Since then, the company has introduced the X10—the subject of this test—and recently announced the X-Pro1 interchangeable-lens compact (ILC) that was one of the most talked-about new products at this year’s International CES show.

Plus, the camera’s performance in the Popular Photography Test Lab showed that the X10 is a very capable premium compact camera that delivers far more than a typical point-and-shoot can.

In the Test Lab
For a camera with a 12MP sensor of this small size, the X10 delivers quite impressive image quality. Our rating scale encompasses compact cameras all the way up to the best full-frame 35mm DSLRs, so it was no surprise that the X10 finds itself just above the middle of that range with an overall Image Quality rating of Very High from ISO 100 through ISO 400.

The backbone of that rating is its resolving power. In our resolution test, the X10 delivered 2130 lines per picture height at both ISO 100 and ISO 200 for a Very High rating. That’s a little over 100 lines less than Fujifilm’s X100, and exactly 100 lines less than the Olympus Pen E-PL3’s best resolution result. The X10 also managed to keep its resolution in the Very High range all the way up to ISO 1600. For a camera with a small sensor, that’s a lot of resolution.

One thing to note here is that the top two sensitivity settings on the X10, ISO 6400 and ISO 12,800, require that you reduce the pixel count to 6MP or 3MP, respectively, and capture only JPEG images. Of course, this limits resolving power: At ISO 6400, the X10 yielded 1510 lines, and at ISO 12,800, it achieved a mere 840 lines. The upside is that noise levels are relatively low at these settings, though they still measure well into the range of our Unacceptable rating, with scores of 3.7 and 4.3, respectively.

And, as is often the case, noise proved to be the main limiting factor in the X10’s overall image quality rating. As with most small sensors—especially those with high pixel counts—noise presents a challenge. While the X10 keeps noise to a Low or better rating up to ISO 400, by ISO 1600 it has already reached Unacceptable territory.

We base all of our official test results on RAW files converted to TIFFs using the software provided with the camera by the manufacturer, using the default settings. But comparing these results to the camera’s highest-quality JPEG files can also be instructive. This is particularly true for more consumer-oriented models, where manufacturers expect that relatively few users will want to bother fiddling with RAW.

In this case, JPEGs from the X10 showed significantly more noise than converted RAW files at the lowest ISOs—1.7 versus 0.9 at ISO 100. On the other hand, they managed to keep noise in the acceptable range at ISO 1600—and lost only 20 lines of resolution from the RAW result at the same ISO.

Given the differences between the RAW and JPEG results, it seems to us that the X10’s in-camera processing and supplied RAW conversion software go down very different paths. This leaves us to wonder whether Fujifilm was wise to outsource its RAW processing software to Silkypix, given the unique nature of the EXR sensor, which places the pixel array at a 45-degree angle compared with traditional CMOS sensors. During our field testing, we very much preferred using Adobe Camera Raw software to convert files from the X10, and achieved very pleasing results.

Though it’s not always a given for compact cameras (even higher-end models), the Fujifilm X10 easily claimed an Excellent color accuracy rating, with an average Delta E of 7.4.

In the Field
While the Fujifilm X10 looks a whole lot like a rangefinder, it behaves much more like a high-end compact camera. For starters, its viewfinder is not an actual rangefinder. While the same can be said for the X100, that camera’s hybrid finder much better approximates the rangefinder experience.

Instead, the X10’s finder is more like (a pretty nice) version of the zoom finders that used to be found in upscale film compacts years ago. Unlike many viewfinders on past point-and-shoots, the X10’s is clear, undistorted, and has a welcome diopter adjustment. It also has quite good eye relief, even for eyeglass wearers.

Its main downfall? It shows no shooting information, so outside of full auto mode you’ll find it difficult to shoot without continually pulling the camera away from your eye. Furthermore, the finder’s 85-percent accuracy means that you can’t frame with any level of precision. Whenever we wanted to check out the picture elements we were placing at the edges of our frames, we had to resort to the LCD.

We also wish there were an auto shutoff for the LCD when you raising the camera to eye level; turning it off requires one (or more) presses of the display button.

Speaking of buttons, the X10 has plenty—its extensive external controls put many an entry-level DSLR to shame. Modes and exposure compensation each get their own dial, and there’s even a dedicated button for RAW capture. Sadly, you will have to dig deep into the Set Up menu to turn on RAW shooting if you want to capture more than one RAW image in succession.

Oddly, there’s no button for ISO, but you can program the top-deck Fn button for this. The single command wheel switches function with an inward press on it, so we hardly missed having a second command wheel.

The menus are well-organized and easy to read, though we rarely needed to explore them in our field tests.

The X10’s magnesium-alloy body feels very solid in the hand; a front bump and nubby leather-like surface provide a pretty secure grip. The shutter button and command wheel fall naturally underneath the index finger and thumb.

Bottom Line
While Fujifilm’s X10 looks even more like a rangefinder than most rangefinder-style ILCs, at its core it is really just a high-end compact camera. Compared with the Canon PowerShot S100, for instance, the X10 offers slightly higher resolution, much nicer styling, more dedicated control buttons, and a manual zoom ring that’s both more ergonomic and more precise than the S100’s electronic zoom.

The X10 also has a more useful lens, it in terms of maximum aperture, than any of the kit lenses that come with ILCs. Those typically have maximum aperture ranges of f/3.5–5.6; much slower than this one.

So while the X10 carries a hefty price tag, it is worth considering if you appreciate its design—and if its flaws, such as diminished resolution and lack of RAW capture at high ISOs, do not pose a problem for your style of shooting.