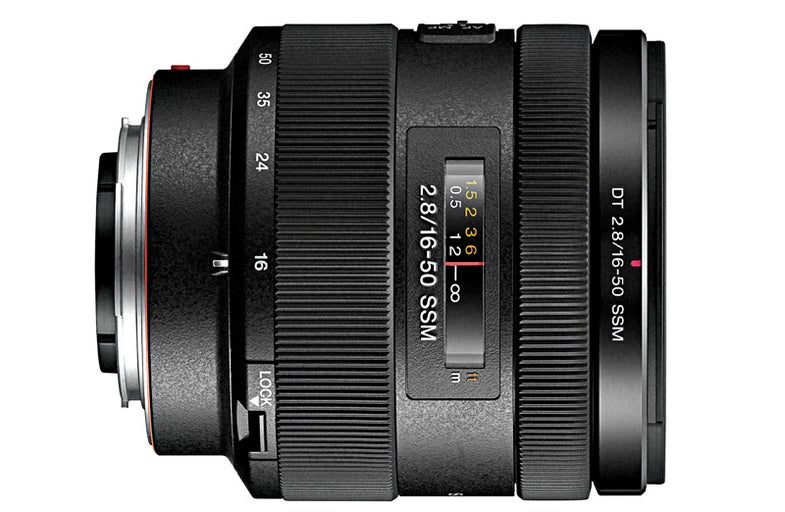 This high-speed, standard-range, Alpha-mount utility zoom scales up to the full-frame equivalent of a 24–75mm on Sony APS-C bodies. When it was introduced with Sony’s remarkable Alpha 77 in mid-2011, Sony insiders referred to the 16–50mm f/2.8 ($700, street) as the camera’s “non-kit kit lens,” and, in fact, the two are often bundled.

This lens has a parfocal design that (unlike the more common varifocal zoom) keeps a subject sharp as you change zoom settings—always nice. Its weight and size are about average, and it is compact enough to throw no shadow when used with the A77’s built-in flash (except in close focus at the widest focal lengths). Slightly more compact than Sigma’s 17–50mm f/2.8, it is also more petite than Tamron’s 17–50mm f/2.8 (both of these come in Alpha mounts, as well).

Sony’s pro-worthy glass boasts a 120-degree manual-focus turning radius. The extra-fine focusing this permits is nearly twice the norm of this popular class of high-speed utility zooms. Nothing short of phenomenal, its autofocus action on the A77 was as close to absolutely silent and instantaneous as anything we’ve encountered. Also nice: Its filter ring doesn’t rotate.

On our optical bench, we were surprised to find that its best SQF numbers appeared at its widest apertures for two of the tested focal lengths—good news for selective focus fans and unusual in a wide, large-aperture zoom.

In DxO Analyzer 4.0 tests of distortion control, we found Visible-range barreling at 16mm (0.71%). This wasn’t up to the Sigma’s strong 0.48%, but Sony controlled pincushioning at 35 and 50mm (0.02% and 0.06%) enough to win best-in-class of the six comparable zooms recently tested. It also produced no light falloff at any focal length—also best-in-class.

Less awesome: its suitability for close-ups (1:4.4 maximum subject magnification), was a bit behind the comparable Sigma (1:3.9) and the much less expensive Tamron (1:4.1) zooms.

While it’s optically strong and a pleasure in the hands, the true strengths of this lens are discovered in using it. Especially on the A77, it offers a new level of focusing speed and silence—and the amount of subject detail the two can capture must be seen to be appreciated.