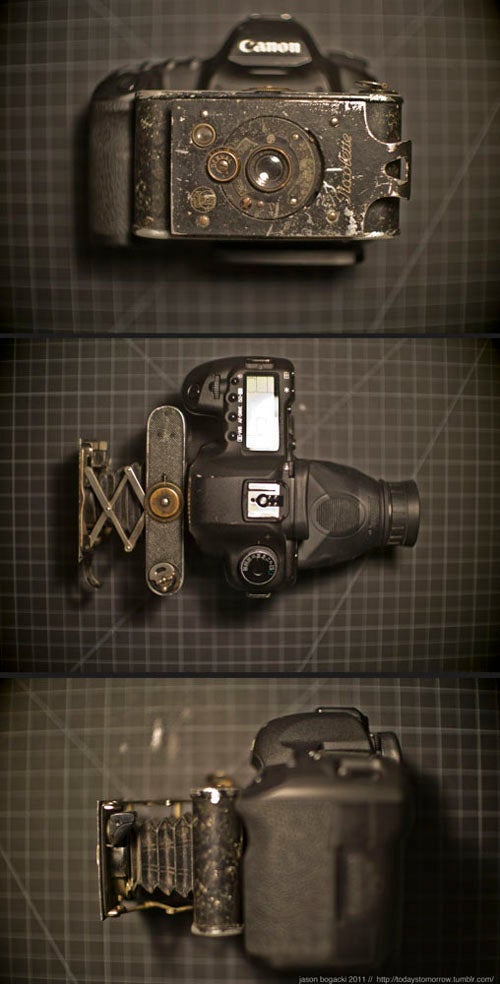 Jason Bognacki had a Piccolette Contessa-Nettel from 1919 that he wasn’t using, so he did the only natural thing — he strapped it to the front of his Canon 5D Mark II, taking advantage of an almost century old piece of hardware. The camera has a Zeiss Ikon 7.5cm f/6.3 lens, and while it’s an ancient piece of kit it produces some pretty sharp shots, as you can see. Once Bognacki took it outside, it produced some of the most enormous lens flares you’ll ever see.

The 5D Mark II seems to be the go-to camera for these sorts of modifications. The last few years have seen people use them with a 1908 Wollensak 35mm F5.0 Cine-Velostigmat, [Zeiss Ikon Contina L](http://Zeiss/ Ikon Contina L), and Novar-Anastigmat 75mm f/3.5 lens. One departure I’ve seen is a wonderful hack job, strapping together a Polaroid 110B with a Sony NEX-5. Given the huge popularity of the lomo esthetic right now, and the ready (and cheap) availability of old film cameras, I wouldn’t be surprised to see more of this in the near future.