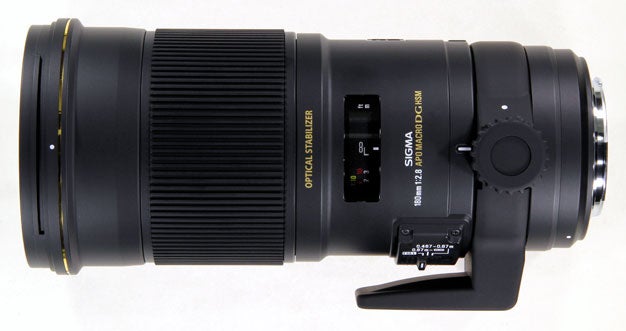 The 180mm Macro has been a part of Sigma’s stable for a while. But, the new version opens to F/2.8 instead of the slower F/3.5. Sigma also gave it optical image stabilization to help keep things sharp, despite the super-close focusing and the telephoto length. Minimum focusing distance is just 18.5-inches.

It’s a true macro lens because it offers a magnification ratio of 1:1. Inside, there are three FLD low dispersion elements to improve color accuracy. On the outside, there Sigma has applied their Super Multi-Layer Coating to cut down on flare and ghosting.

The HSM motor is a nice feature to have on a lens like this, especially if you’re trying to get close with insects or other small animals. It has a nine-blade diaphragm and internal focusing, so the front element doesn’t move and cause even more distraction.

There’s no official release or pricing information, but we’re hoping to get some sample shots with it on the show floor if we’re allowed.