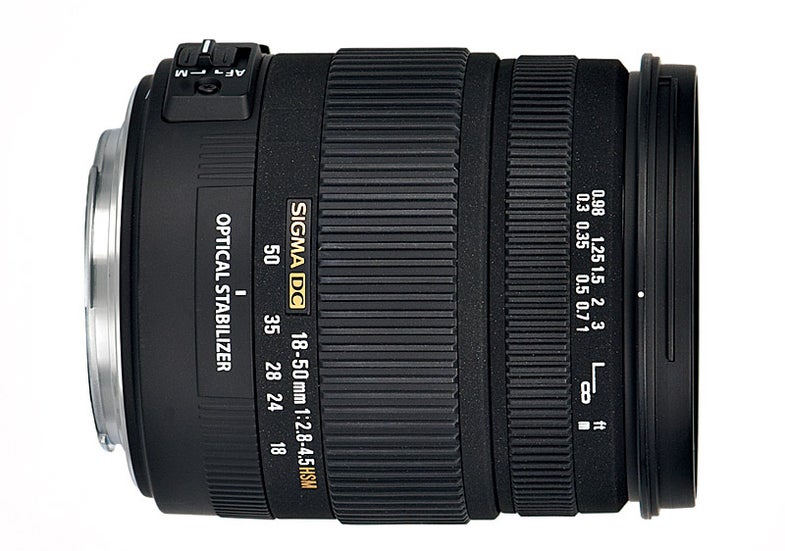 Introduced in 2008, this lens is a step up from a kit zoom but still has much in common with the kit glass from Canon and Nikon. Like the big guys, the Sigma offers image stabilization, a near-silent HSM focusing motor, and a street price of around $200.

Sigma’s 18–50mm does them better, however, on several fronts: It’s faster, with top-drawer glass (three aspheric and two low-dispersion elements), a stationary barrel, and metal lensmount. It scales up to a 29–80mm equivalent on our test Canon, to 27–75mm on other APS-C bodies.

Weighing just under a pound, it is light and compact enough to cast no shadow when used with the pop-up flash on our Canon EOS Rebel 3Ti. It’s also attractive, with matte black finishing and gold accents, and sports well-damped zoom and focusing rings.

On our optical bench, it drew down Excellent-range SQF scores at the three tested focal lengths. Despite its high-quality glass elements, however, it produced slightly less impressive sharpness and contrast scores than the stablized 18–55mm kit lenses from Canon and Nikon, or the unstabilized Pentax (whose system puts IS in the camera instead).

In distortion control, the Sigma showed noticeably less barreling at 18mm (0.34%) than its three competitors. Unfortunately, its 0.17% pincushion distortion in the mid-range focal lengths wasn’t up to the Canon, Nikon, and Pentax’s better-than-pro-glass 0.02% (Imperceptible) pincushioning.

Other unimpressive optical scores: The Sigma’s maximum subject reproduction ratio came in at a ho-hum 1:4.23, which compared unfavorably to the Nikon’s 1:2.48 and Pentax’s 1:2.59. Only in light falloff did the advantage swing back to our Sigma, which eliminated vignetting by f/4 at 18mm, compared with the Canon’s f/8 and Pentax’s dismal f/10.