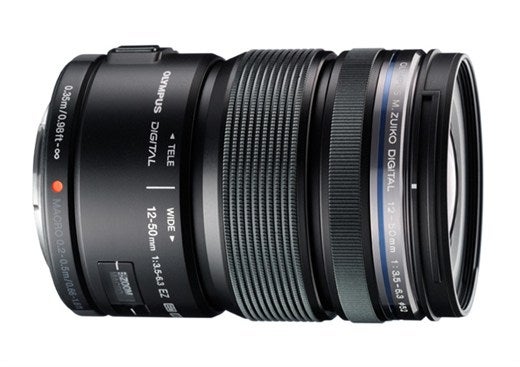 Olympus has announced a new lens for Micro Four Thirds, the $499 M.Zuiko Digital ED 12-50mm f/3.5-6.3 EZ. Expected to launch in January, it has a 35mm equivalent focal length of 24-100mm, and is the first Micro Four Thirds lens to have the same weather sealing seen on the Four Thirds SHG (Super High Grade) series lenses.

The lens also has a macro mode, which is engaged by pushing the zoom ring forward while pressing the macro button on the side of the lens. It offers 0.72x magnification, and can focus 8-20″ away. There is also a motorized zoom designed for quiet operation during video recording, with controllable zoom speed.

With a $500 sticker price, this is not a cheap lens, and the maximum aperture of f/6.3 at 100mm is slightly disappointing. For comparison, look at the Panasonic 14-45mm which has a maximum tele aperture of 5.6. Of course, there’s always going to be some kind of price to pay for toughness, so we’re interested to see how it performs in the elements.