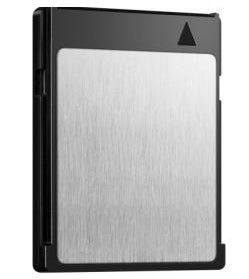 For years, CompactFlash was the memory card of choice for serious photographers, and is still used in many DSLRs, especially at the higher level. But, SDHC has been muscling in on that territory. So, CompactFlash has announced a totally new, faster card format, dubbed XQD. As far as we can tell, XQD doesn’t actually stand for anything — or if it does, the CompactFlash Association hasn’t said. The new format is based on the the PCI Express specification, and at 38.5×29.8×3.8mm, it’s smaller than CF but larger than SD.