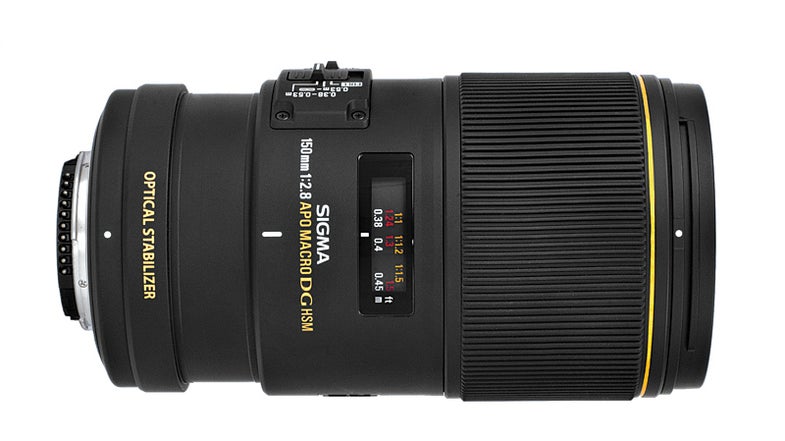 Photography’s only high-speed, 1:1, long-tele prime, Sigma’s optically stabilized 150mm f/2.8 ($1,100, street) replaces a similar, unstabilized lens from several years ago. More has been updated than just the OS mechanism: This lens produces significantly less distortion than its predecessor, and resistance to weather and dust has been vastly improved.

This telephoto macro lens is no lightweight: At 2.54 pounds, it’s almost a pound heavier and a half-inch longer than the lens it replaces. Its tripod collar (included) is much appreciated.

Sigma built in a number of welcome perks: a focus-area limiting switch (full, macro, and near-macro ranges), a nonrotating lens barrel, multimode OS, a handsome matte-black finish, and an unusual full-range macro focusing scale that ranges from 1:1 to 1:10. (Unfortunately, its red-on-black numerals are somewhat difficult to read in dim light.) Also nice: a substantial case and two lens shades—one for full-frame cameras, another for APS-C.

In field tests, we found the AF system as fast as it is silent—clearly an improvement over its predecessor, which, in July 2005, we deemed rather slow. For close-up work, we especially appreciated the perspective compression of the 150mm focal length—far more appropriate for tight headshots than, say, a 60 or 85mm macro.

While the SQF numbers were in the Excellent range and indicated superior sharpness and contrast, they were slightly less strong than those achieved by the lens’ predecessor, dropping to an average of 91.6% from above 94%. That’s probably not a significant difference, and is the price you pay for image stabilization and other optical improvements.

Distortion control, for example: We found virtually no distortion at either close focus or infinity, while the previous lens showed 0.35% Visible-range pincushioning outside the macro range. Just as impressive: we found no vignetting at close focus, and, at more common shooting distances, it vanished by f/3.5.

This lens is obviously a paragon of its breed and no doubt worth every penny. Still, at almost twice the street price of the non-OS lens when it came out in 2004—it’s quite expensive by third-party standards.