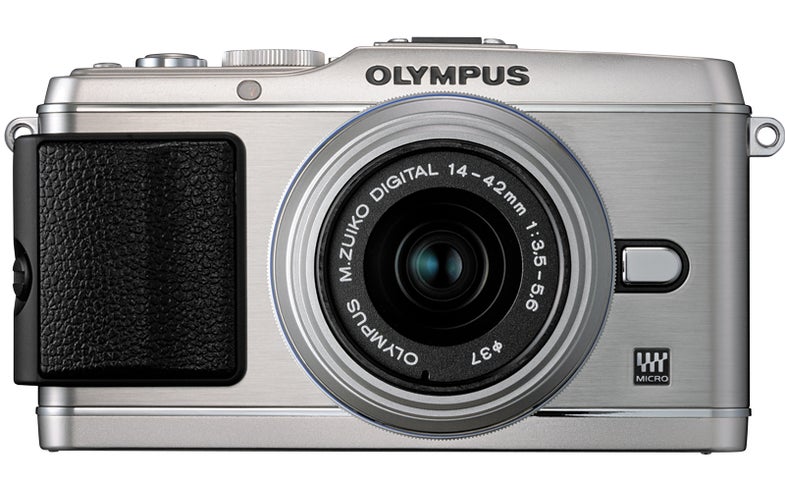 While most people would have a hard time telling them apart, Olympus’s Pen E-P3 and E-P2 have some serious differences under their metal exteriors.

In the Test Lab
Considering that the P3 has the same number of pixels as previous Olympus Pens, it makes sense that the results we saw from the camera in our tests are very similar to its predecessors. Overall image quality scored Very High from ISO 200 through 1600.

The limiting factor was resolution, which came in at 2240 lines per picture height at ISO 200. That’s just below our cutoff for the next higher rating, which means the P3’s resolving power isn’t far behind the 12MP Panasonic Lumix GF3 (tested on page 73), though the P3, with its metal body and accessory shoe, is aimed at a higher level shooter than that camera.

Color accuracy earned an Excellent score, just barely coming in below our cutoff of 8 for top honors in this lower-is-better test. Curiously, the P2 scored better in this area—while we can’t be sure, perhaps this can be chalked up to Olympus getting used to the new sensor. In our noise test, the P3 showed improvement, with scores of Low or better from its lowest sensitivity of ISO 200 all the way to ISO 1600. Of course, it’s worth noting that the P2’s sensitivity range extended down to ISO 100 and topped out at ISO 6400, while the P3 captures ISO 200–12,800. This means that shooters looking for very slow shutter speeds might have to employ stronger neutral-density filters with the P3 compared to the P2. But the P3’s slightly higher resolution and extra stop of usable sensitivity at the high end may well be useful to a wider array of photographers.

If you shoot JPEGs, or RAW + JPEG, you may want to turn the noise reduction down a notch from its default setting in the camera. We found that the JPEGs made by the camera’s default processing were smoothed out a little too much by the noise reduction for our liking. It makes sense to experiment a little bit to see what your preferences are before using the camera for a very important shoot.

One of the things we really like about Olympus’s ILCs is the sensor-shift image stabilization. Given that it works on any lens, we can use adapters to mount various old optics, including classic Olympus OM glass and the stabilization will work for them, too.

In our lab test, our shooters gained an average of 2.5 stops of shutter speed leeway using a 150mm-equivalent lens. With longer lenses, you might get a little more, but we were still impressed with the results.

In the Field
Although the matte paint on the black version might fool you, the P3 is clad in a rugged metal shell, one of the classier features of the P line of Pen cameras. We missed the P1 and P2’s cute, recessed mode dial, but gladly traded it for the new pop–up flash—sorely missing from Olympus’s last two flagship Pen models.

Speaking of mode dials, we were happy that the P3 has one at all. Panasonic eschewed such a dial on the GF3 in favor of a smaller body. Given the P3’s touchscreen, Olympus could have gone this route, too. We’re thankful for the physical dial, which lets you prep for shooting more thoroughly—and without expending any battery power.

Olympus did do a nice job of integrating touch controls into the P3. These remain one step behind Panasonic’s, and we look forward to future innovations in this area (let’s hear it for Panasonic’s nifty pinpoint AF). Still, with the P3, being able to select AF point on the touchscreen sped up our shooting process plenty of times during field testing. Plus, if you like the idea of being able to literally point and shoot by touching the screen, then this Pen will deliver for you. (You can easily disable that function.)

While we wouldn’t say we found an abundance of buttons on the P3, there certainly are enough to complement the touchscreen. Plus, you can customize five of them in the custom-function menu. We were a little annoyed that you can’t assign ISO to the Fn2 button next to the shutter button, but we were able to put it in place of flash control in the four-way control pad on the camera back. We just don’t understand why you can’t select from any of the major camera settings, or at the very least a commonly used one like ISO, for buttons like this.

The vertical command wheel on the P2 remains here on the P3 and, combined with the second command wheel encircling the four-way rocker, makes shooting in manual mode a little easier. In any of the manual or semi–manual shooting modes, you can choose which command wheel adjusts which setting. In aperture- or shutter-priority auto, one command wheel will control exposure compensation.

One of the benefits of the new sensor in the P3 is that Olympus is able to double the speed of its data sampling to 120 frames per second for short periods of time for the purpose of autofocus. This is very similar to how Panasonic achieves its speedy AF in its recent models. We found the autofocusing of the P3 just as fast as the Panasonic’s, putting these two ILC makers neck and neck in the lead of AF.

We field-tested the P3 with the included standard grip. Olympus also offers an accessory grip that extends further forward, and you can use the camera without a grip attached. The included grip is very similar to the one on the P2, though it has a slightly more exaggerated ridge for your finger to latch onto.

Burst shooters won’t be very impressed by the P3’s 3-fps continuous shooting, but video aficionados will like the 1080i 60-fps video. The video quality is very pleasing and the continuous AF, though not as snappy as that of most camcorders, is among the best we’ve seen in any ILC we’ve tested so far.

Bottom Line
Olympus’s P3 does a good job of updating the company’s top Pen model. P2 shooters thinking about stepping up will gain a pop-up flash, slightly less noise, a tiny bit of extra resolving power, but will have to trade ISO 100 for ISO 12,800. Some may find ISO 12,800 useful for marginal lighting situations; others may find it too noisy. We appreciate the upgrade, and feel that the added features outweigh any ISO argument.

In all, this is a very worthy addition to the Pen line of ILCs.