Despite a lack in the autofocus department, this lens is sharp as a tack 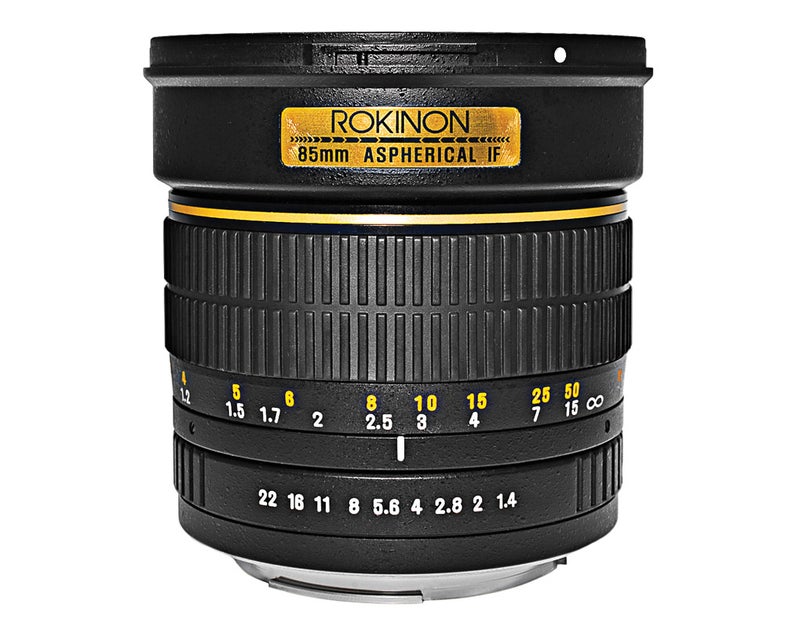 No AF is a small price to pay for this bargain. Dan Bracaglia
SHARE

A welcome newcomer to these shores, Rokinon-branded high-speed prime lenses from Samyang offer a tradeoff many shooters will find tempting: In place of autofocus, you get high, f/1.4 speed at a bargain price.

Available in most popular mounts (shown here in the Canon version), this full-frame 85mm f/1.4 ($270–$300, street) is a 128mm equivalent on most APS-C bodies (136mm on Canons). It’s well-built, with a polycarbonate outer shell and metal chassis and lensmount. More sophisticated electronically than the noncoupled 35mm f/1.4 Rokinon tested here in July, it offers an autodiaphragm, to avoid stopping the lens down to the working aperture before shooting. The Nikon-mount lens goes further with two versions, one with focus confirmation as well as AE data. The AE-only version costs $30 less. As with older, non-G, Nikon lenses, you must set the lens to minimum aperture for autoexposure in program and shutter-priority modes; unlike Nikon lenses, the Rokinon lacks a minimum-aperture lock.

The Rokinon also goes without a lens-mounting index bullet. Otherwise it’s well-marked, with easily legible focus and aperture scales. Cosmetically, the lens mates up nicely with our test camera, the Nikon D3s, and at just over 18 ounces, it’s by far the lightest of the four other 85mm f/1.4s we’ve recently tested from Nikon, Sigma, Sony, and Carl Zeiss.

In our test lab, the lens produced Excellent SQF scores at 11×14 at all apertures. Of the four lenses mentioned above, only the 85mm f/1.4G Nikon AF-S clearly outperformed it.

In DxO Analyzer 4.0 tests of distortion control, the Rokinon held barrel distortion to an Imperceptible 0.04%—a great performance, but average for this heralded breed. The Sigma and Zeiss permitted a mere 0.02%.

The Rokinon’s subject magnification is its only real optical weakness. That 1:11.33 maximum magnification is slightly less than half the average for this class, and will certainly crimp the style of anyone who wants to get close.

Still, the advantages of f/1.4 exert a powerful allure: Beautifully defocused backgrounds, shallow depth of field for selective focus, sharp pictures in low light, and action-stopping shutter speeds in good light. Traditionalists and video shooters may not mind having to reach up front to change focus and, depending on the exposure mode, aperture. Autofocus? At this price, it’s overrated.