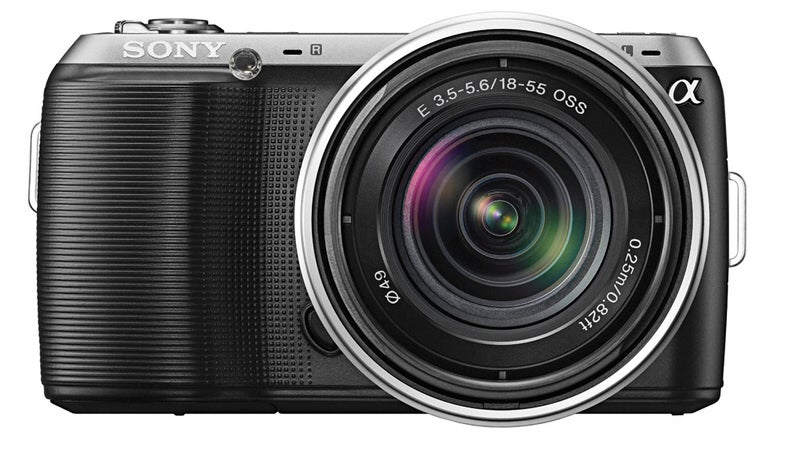 While it's not uncommon for smaller ILCs to omit the view-finder, models from Olympus and Panasonic offer accessory EVFs to fill the void. Sadly, Sony doesn't offer an EVF for its NEX system.
SHARE

Sony has its own unique take on interchangeable-lens compact cameras with its NEX line, pairing extremely small bodies with relatively large lenses. The latest addition to the lineup, the 16.2MP NEX-C3 ($650, street, with 18–55mm f/3.5–5.6 lens), uses the same sensor as the Sony Alpha 35 we tested in our August issue—but provides a completely different shooting experience from that camera.

In the Test Lab
As expected, the NEX-C3 delivered image quality results similar to the A35’s. And with two more megapixels than its predecessor, the NEX-3, it’s not surprising that it delivers more resolving power. The increase is modest, but it’s just enough to push the C3 up to an Extremely High rating in our scale with 2260 lines per picture height.

That resolution drops away some as the ISO is increased, thanks to Sony’s aggressive noise reduction. By the NEX-C3’s top sensitivity of ISO 12,800, resolution drops to a Very High rating with 2040 lines.

Color accuracy also improved over the previous model: The C3 delivered an average Delta E of 7.8, just clearing an Excellent rating. The NEX-3, by contrast, managed only an Extremely High rating. It’s rare for a camera to score anything other than Excellent in color accuracy these days, so it’s reassuring that Sony is paying more attention to this issue.

In our noise test, the NEX-C3 performed very similarly to both the NEX-3 and the A35. The C3 keeps noise in the Low or better range from ISO 200 through 800. That’s one ISO step better than the NEX-3’s results, but it should be noted that the two cameras basically straddle the dividing line between the Low and Moderately Low ratings, making the C3’s edge a minor one.

While the improvements Sony put into force bring the NEX-C3 in line with the Olympus Pen E-PL2 in terms of lab performance, both of those cameras continue to trail Panasonic’s Lumix line of ILCs in terms of resolving power. Moreover, Sony continues to use more pixels to achieve the same resolution as its competitors—the NEX-C3’s 16.2 megapixels provide the same resolution result as the E-PL2’s 12.3 megapixels, and the 16MP Lumix G3 served up about 300 lines more than that.

While Panasonic and Sony’s differing approaches to noise reduction make that comparison more difficult, judicious application of extra noise reduction on the G3’s images should yield noise performance equal to the NEX-C3, but with more resolving power.

In the Field
The NEX-C3’s body is very similar to its predecessor’s. Its plastic body doesn’t have the ultra-rugged feel of the NEX-5’s metal-clad chassis, but as plastic goes it feels solid enough. While the SD card doesn’t reside behind the same door as the battery anymore, it still loads into the bottom of the camera—a problem if you use a tripod and have to change the card, since the card door is right next to the tripod socket.

Last year we complained about the interface on Sony’s NEX cameras, specifically the scarcity of buttons and the sluggish menu-based control system. Sony eventually released a firmware upgrade that let users customize the available buttons, which was mildly helpful.

The C3 also allows such customization right out of the box: You can assign functions to the left and right directions of the scrolling control pad, and choose the function of the pad’s center button as well as one other button on the camera back. This helps cut out a few of the steps in changing commonly used settings.

The responsiveness of the menus also feels better than it did in Sony’s earlier ILC models. While the NEX-3 and NEX-5 hesitated before moving on to the next menu, the NEX-C3 moves swiftly.

But we still don’t like the actual menu structure much. Image Size has its own section of the menu, for example, as does Brightness/Color. Various other shooting settings are scattered among different menus. Although the C3’s icon-laden screens look pretty, we much prefer the structure of DSLR menus, which pack more onto the screen and thus speed up the whole process.

Similarly, we’re split on the C3’s LCD monitor. We love its 921,600-dot resolution and its up/down tilt. But, given Sony’s proclivity to touchscreens in its camcorders, we’re surprised that the company doesn’t employ them in its ILCs, as do Panasonic and Olympus.

Burst shooters will likely be enticed by the C3’s 5.5 frames-per-second Speed Priority mode; as in many compact cameras, this mode locks focus and exposure after the first shot. If you want continuous AF and autoexposure between each shot, you’ll have to settle for the camera’s regular burst mode, which captures at 2.5 fps, placing the C3 just behind most entry-level DSLRs. However, most of those entry-level DSLRs can also capture more than the 14 full-sized, Fine-quality JPEGs the C3 can shoot in a single burst.

Sony continues to impress us with its sophisticated image processing. The C3’s in-the-camera HDR does a great job of aligning three handheld exposures to capture a wider dynamic range than a single shot could. If you are not particularly steady, or if you’re shooting night scenes that require slow shutter speeds, it’s still a good idea to use a tripod to steady the camera when shooting in this mode.

While in some cases built-in HDR will yield images that look less than realistic, with the NEX-C3 we were typically able to adjust the number of stops (from 1 to 6 EV) in the bracket to yield nice-looking results. There’s an option for the camera to select the intensity of the HDR effect, but we found that in many instances the C3 tried to bracket too far, creating a fake look in the images.

Occasionally there was ghosting of moving objects in a scene, but that’s typical of any HDR. It pays to be aware of any elements, such as cars, that might move through the scene you’re shooting, and try to wait for a time when these are not moving or not evident in the frame at all.

The Handheld Twilight mode continues to do an admirable job of reducing noise in low-light shots by combining six exposures and omitting the noise in each to produce clean image data. Since most image noise is random, it will appear in different places in each image. So, among the six images captured, there will be a large portion of the image that has no noise.

Sony’s 3D Sweep Panorama creates interesting results if you have the means to view 3D images. If not, the regular Sweep Panorama mode makes it simple to create very wide or very tall images without having to stitch them on a computer. Of course, an array of scene modes is also available for fans of automated shooting.

Serious video shooters should know that the NEX-C3 can capture only up to 1280×720 30p video, so if you want Full HD, you’ll have to try the NEX-5 (if you want to stick with Sony’s system) or another ILC or DSLR.

For the majority of the photographers the C3 is aimed at, 720p video should be enough. The footage we shot looked very nice and we saw little in the way of video artifacts. With current HDTVs the difference between homemade 720 and 1080 footage is getting smaller than ever. We should also note that when editing the video with Adobe’s Premiere CS5, we encountered no problems with the MP4 file format.

Bottom Line
Though Sony has addressed some of the interface issues that led to our cold reception of the first NEX bodies, the C3 still feels like it’s a step behind the competition. The body remains among the smallest you can find in an ILC (at least until Pentax’s tiny Q model hits the market this fall), but the big lenses negate much of this benefit.

Furthermore, the Micro Four Thirds system continues to offer a wider array of lenses. To its credit, Sony has added a 30mm f/3.5 macro lens with 1:1 magnification to the NEX system, as well as a more powerful flash with bounce capability, the HVL-F20S. Still, the company hasn’t been able to keep up with the aggressive lens introductions of both Panasonic and Olympus, the latter of which has also created some very innovative accessories for its system, such as the PenPal for wireless image sharing.

So while we can say that the Sony NEX-C3 can produce very fine images, Sony has a way to go if its fledgling ILC format is to compete against the Micro Four Thirds clan.