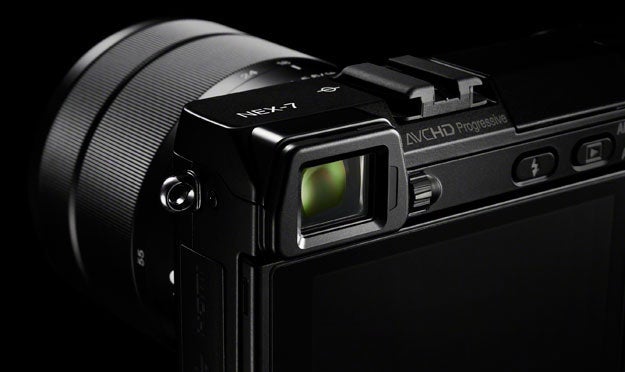 If you’re looking through the spec sheet for the NEX-7, you’ll notice that there is a surprising amount of carry-over from that of Sony’s new mid-level (one might even say prosumer if that wasn’t such an ugly phrase) DSLRs. The NEX-7 uses the same 24.3-megapixel Exmor APS HD CMOS sensor and BIONZ processor as its DSLR counterparts, making it the most powerful — at least from a resolution standpoint — camera in its class. it has the same 100-16000 range for ISO settings and AVCHD Progressive Video capture up to 60p at full HD resolution with stereo sound.

One of the coolest new additions is the OLED TruFinder viewfinder, which allows you to hold the camera up to your eye without the need for an add-on viewfinder accessory. Not only that, but it also gives you approximately 100% coverage. Of course, it still has a 3-inch LCD display that tilts 90-degrees up and 45-degrees down for composition via screen.

The massive speed has also been carried over from the Alpha line, giving the NEX-7 a shutter lag of just 20 milliseconds and allowing it to grab 10 FPS at full resolution, assuming you keep the AF and AE fixed for all of the shots. It’s not quite as burly as the A77, but the Sony press material claims those specs make it the “world’s fastest burst shooting speed of any mirrorless interchangeable lens camera.”

The upgraded control interface is called TRINAVI and consists of two dials on top of the camera as well as a control wheel to give users who are more familiar with DSLR operation a more comfortable transition.

The top of the camera has a pop-up flash system and an Auto-lock Accessory Shoe that’s compatible with Sony flashes and “adaptors to accommodate studio lighting” which refers to wireless systems like Pocket Wizard and Radio Popper.

While it has the guts of a DSLR, this is still an NEX camera, which means the Picture Effects modes make an appearance, including built-in HDR and 3D Sweep Panorama.

The NEX-7 starts shipping in November as part of a kit with the 18-55mm kit zoom lens for $1350 or body-only for $1,200. At that price, this camera may encroach on the territory of the more stylish, but decidedly less feature-laden than Fujifilm’s X100.