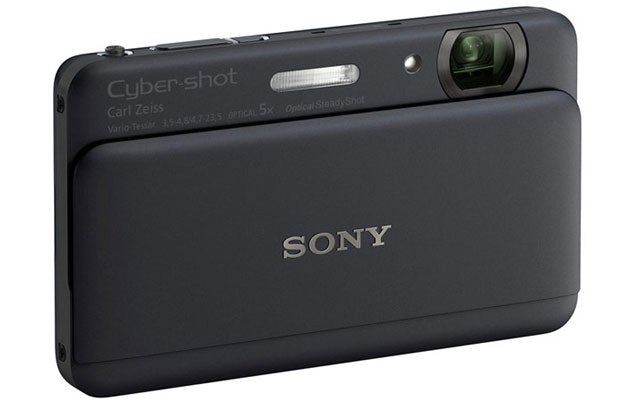 By now, almost everyone who has ever even held a compact camera is familiar with the concentrated evil that is digital zoom. But, non-optical zooming is not dead and Sony is the latest company to try their hand at non-degrading image extrapolation.

The Cyber-shot TX55 is just 12.2mm thick, which makes its 5x optical zoom a little impressive. But, Sony claims that they can use their new By Pixel Super Resolution technology to give it the equivalent of 10x zoom without degrading the image. We’ll obviously need to see a final example before we can comment on that whole “without degrading the image part.” Casio has been trying something similar with their Super Resolution zoom in their Tryx and a few other compacts.

The TX55 pulls down 1080 HD video in AVCHD format — standard issue in the Cyber-shot line-up — but the By Pixel Super Resolution gives it the ability to snag 12-megapixel still while video is rolling.

The rest of the camera’s features should seem fairly familiar, especially the 16.2-megapixel Exmor R CMOS sensor that has found its way into quite of few Sony cameras lately. The back of the camera is taken up by a 3.3-inch Xtra Fine OLED touch-screen. You’ll also find Steady Shot image stabilization and an AF system that claims focus speeds as low as .1 seconds.

The TX55 starts hitting shelves in September for $350, at which point we’ll be very interested to give this new image embiggening [Editor’s note: “embiggening is a Simpsons reference, so save your comments about it not being a word] tech.