New York Times photographer Doug Mills was struggling to take record events both on video and with photographs, until he discovered he could just stack the two. 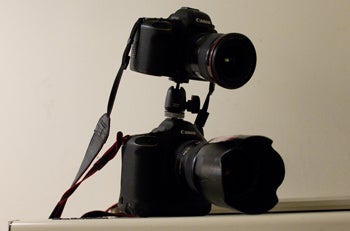 The NYT’s staff photographer Doug Mills was faced with a conundrum: how to shoot both video and still photos of an important event, but have them both come out well? Extracting stills from video is messy and often low quality, and his attempts to balance an HDSLR around his chest while shooting with his hands didn’t lead anywhere.

That was until Mills found a micro-ball head on a hot-shoe mount, and in a fit of genius, slapped one camera on top of the other. He’s dubbed his Frankenstein creation the “Times-Two”, and while the video footage is punctuated by shutter sounds, it’s still perfectly usable.

With Mills’ Times-Two, the top camera shoots video and the bottom still frames, and the added weight of having both strapped together helped stabilize the footage without needing a HDSLR rig.