With enough time and gear, you might be able to set up something as awesome as this video from 2D Photography 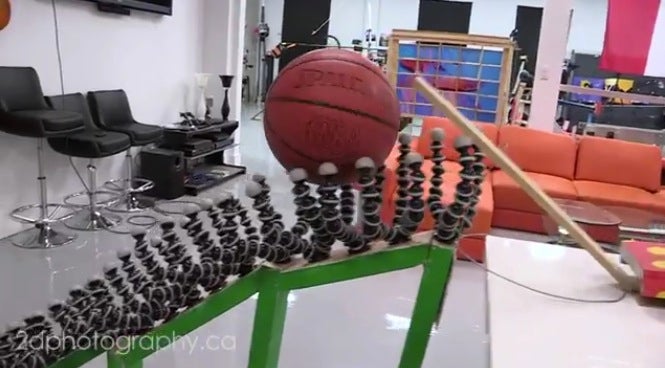 This video from 2dphotography.ca is the epitome of a Rube Goldberg Invention. For four incredible minutes, a warehouse of photography gear is abused, rolled, smashed, swung, photographed, and used in ways the manufacturer never intended in order to get a single shot portrait shot.

The amount of gear on show here is just astonishing — and occasionally wince inducing as they’re abused. Watching those Profoto Boxes fall, or the lens get whacked by a hammer? And then some of the uses are wonderful, like repurposing a monumental number of GorillaPods into a bath for a ball, or using rolling lenscaps down a wall.

The man behind the concept, David Dvir, talks a bit about how it was done on a blog post, and also in the behind the scenes video below. Apparently this has been in the planning stages since November of last year, and in construction since January. Click through the link to see how they made the cool photobooth effect part-way through the shoot. My only complaint is that there’s no music in the video — I bet OK GO would have signed on board for this!