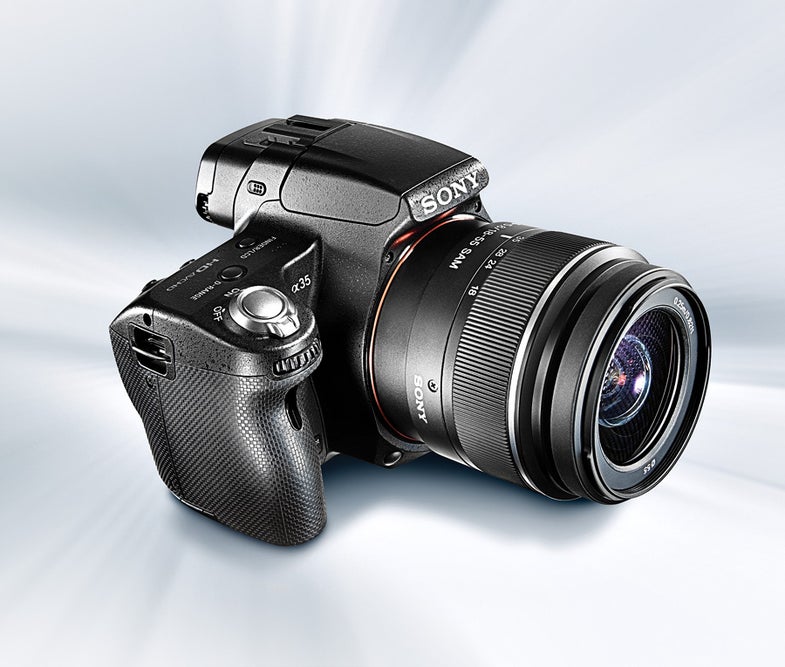 When we first saw Sony’s semitransparent-mirror Alpha A55 and A33 DSLRs, we were intrigued. Then, when we saw how they performed in our tests, we were impressed. Now, Sony has released the A35 ($600, street, body only), a follow-up to the now-discontinued A33. This model boosts the pixel count to 16.2MP, putting it on par with the $800 (street) A55. The A35’s newly developed sensor, however, consumes less power, which Sony says will deliver images with less noise at comparable ISOs.

Indeed, we did see some improved noise suppression over the A33, but that’s not the end of the tale. Sony also upped the HD video capture to the top of the AVCHD spec—1920×1080/60i—which, with the A35’s full-time phase-detection AF, makes for one of the best video recording experiences you can get in a DSLR.

In the Test Lab
As was the case with Sony’s previous hybrid DSLRs, the A35 scored well in our lab tests, though it doesn’t make the most of its sensor’s potential resolving power. It scored an Extremely High rating in our resolution test, with 2280 lines per picture height at ISO 100.

Compare that, though, with the 16MP Panasonic Lumix G3 tested on page 72, which turned in 2570 lines at its lowest sensitivity of ISO 160. It’s not an apples-to-apples comparison—the G3 has a smaller Micro Four Thirds sensor, and its noise scores weren’t as good as the Sony’s. But we were still pleased with the resolution we got from the A35—enough for pleasing prints as large as 11×17 inches and maybe more, depending on the subject and shooting conditions.

Color accuracy also improved. The A35 scored Excellent with an average Delta E of 7.4 from both 8-bit and 16-bit TIFFs converted from RAW files using Sony’s Image Data Converter; the A33 managed only an Extremely High rating.

Noise remained in acceptable territory up to ISO 1600. While this was also true of the A33, the A35 did so with lower noise numbers at almost every sensitivity level. This is impressive, given that the A35 has more, and smaller, pixels packed into the same size sensor, and it backs up Sony’s claim of better heat management on this new version. (Compared with the A55, it delivers about the same resolving power, but slightly more noise.)

All this adds up to an overall image quality rating of Extremely High from ISO 100 to 400—two grades higher than the A33. Autofocus continues to be one of the highlights of Sony’s cameras with semitransparent mirrors (Sony calls them “translucent”). The A35 basically matches the stellar performance we saw from both of Sony’s original models.

Because the A35’s mirror remains fixed during exposure, AF is never interrupted by its flipping. So in burst shooting focusing is very reliable and can handle objects moving relatively quickly toward the camera. Plus, you get continuous AF in video capture.

In the Field
The overall feel of the A35’s body is very similar to the A33’s, with a single command wheel on the front. The grip, covered in a nicely textured rubber, is somewhat short yet deep enough to give you something solid to hold.

Look into the eyepiece and, rather than an optical finder, you find a high-resolution electronic viewfinder (EVF) that provides a nice view of the scene. Like most EVFs, it blanks out very briefly when shooting bursts, making it a bit harder to pan along with a subject. But there are benefits to an EVF, too, such as the ability to navigate menus without taking your eye away from the finder.

As usual in Sony DSLRs, the menus are well divided into subcategories indicated by simple icons, so you won’t be left hunting for how to format your memory card. All of the most-used controls are in the function menu, overlaid on the scene you’re framing. The only one we’d like to see get better placement is the SteadyShot image stabilization, which lands in the main menu at the bottom of the first page of shooting controls. It would be better at or near the top, since it’s likely to be switched on frequently. (The A35’s SteadyShot provided our test shooters with an average of 2.5 stops of shutter-speed compensation when handholding in our test.)

As has become typical in Sony’s compact cameras, including its NEX line of ILCs, the A35 also includes an array of impressive features outside the norm. The Handheld Twilight scene mode, for example, takes six frames with one press of the shutter button and combines them to reduce noise. (Since noise is random, it shows up in different places in each shot and can be reduced drastically this way—without compromising resolution.)

Sweep Panorama mode also combines multiple shots, in this case while you pan holding down the shutter button. The camera splices together the resulting images for a remarkably seamless panoramic shot. The picture height is limited to 2160 pixels in this mode, but it remains the easiest way to make a panorama that we’ve encountered. Plus, if you have a 3D TV or computer system, you can make 3D Sweep Panoramas just as easily.

The A35 can also blend three exposures for an HDR (high dynamic range) image. You can adjust the level of the effect, and since the camera aligns the shots, you don’t have to use a tripod, although the shutter speeds needed for night scenes might still demand one. We got great results shooting very bright scenes with deep shadows.

Video captured with the A35 looks very nice in HD playback. We saw few artifacts, and colors were well saturated. Again, continuous AF is available while shooting video, making the experience much more like shooting with a camcorder. AF noise may leak into the sound recorded by the built-in mics, so an external mic would be a good idea. But—and this is a big but—the A35 lacks its predecessor’s articulated LCD screen, making video shooting less convenient than it is when using the A33 and A55.

The Bottom Line
The A35 continues to show the benefits of a semitransparent mirror in a DSLR. For the average shooter, the speedy and solid continuous AF delivers what most people look for when they step up to a DSLR. Shutter lag is not a part of this camera’s vocabulary, and if only the EVF could provide an uninterrupted image, this would be an amazing sports-shooting body. Some photographers won’t be able to cozy up to the EVF, but if you’re among the crowd that doesn’t mind composing images in an LCD, and you’re shopping in this price range, the A35 deserves your consideration.