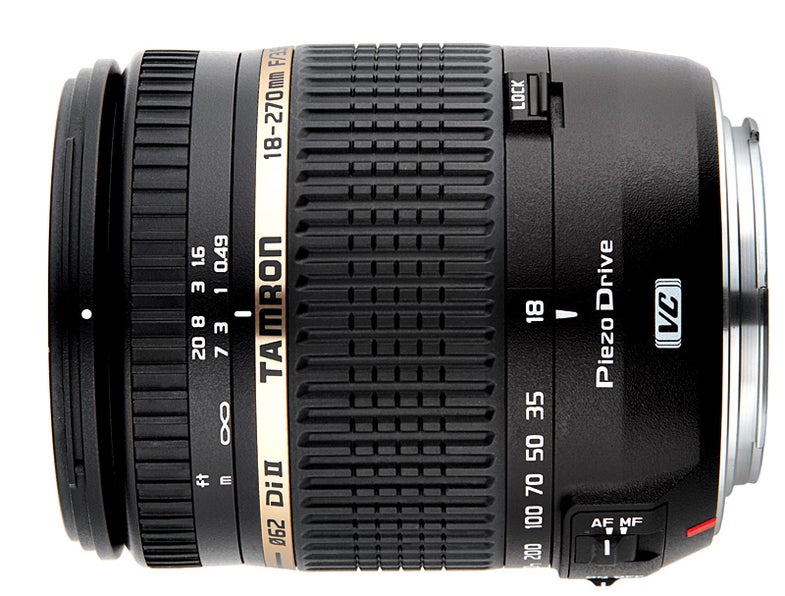 Our staff testers had to put an ear up to the lens barrel to hear any AF sound—it was totally silent from any farther away. The zoom lock is necessary to counter the zoom creep.
SHARE

Every year, Tamron upgrades an all–in–one zoom, extending a zoom range, adding a hot feature such as Vibration Compensation, or shrinking barrel size. In 2011, it’s the digital–only 18–270mm’s turn. Its focal-length range stays the same (an industry-leading 15X zoom ratio), but the new one ($650, street) boasts new features and is surprisingly smaller.

Diameter has slimmed down 14 percent, so the lens now accepts 62mm filters instead of 72mm. It weighs 18 percent less and, when contracted, measures 24 percent shorter. When you consider its zoom range, this lens is miraculously compact.

The lens boasts Tamron’s first ultra–quiet Piezo autofocusing motor, similar to other ultrasonic drives, but even quieter—it makes virtually no sound. Also new: a redesigned VC mechanism that is partly responsible for the slenderizing.

At less than a pound, this zoom offers the most convenient handling of any lens reaching the supertele regions. Fully extended, it throws no shadow when used with a pop-up flash—the previous version did.

On our optical bench, it produced Excellent–range SQF numbers at 18, 35, and 100mm, indicating superior sharpness and contrast. At 270mm, though, it dropped down to the top of the Average range, the first lens to do so in recent memory.

The lens proved optically average in most other respects, with two standout features: spookily silent AF—one of the best lenses for digital video—and the VC system. One of our testers obtained sharp handheld pictures at 1/25 sec and the equivalent of 432mm—3.5 added stops of tripod-free sharpness.

Is this lens for you? Not if you need critically sharp pictures at its longest end. For everyone else, especially DSLR video fans and travelers with minimal luggage space who want a single all-in-one superzoom, this one’s very hard to beat.