Which Nikon 50mm Lens Should I Buy?

Well, that depends on what gear you already have, what you want to shoot and what your budget looks like. 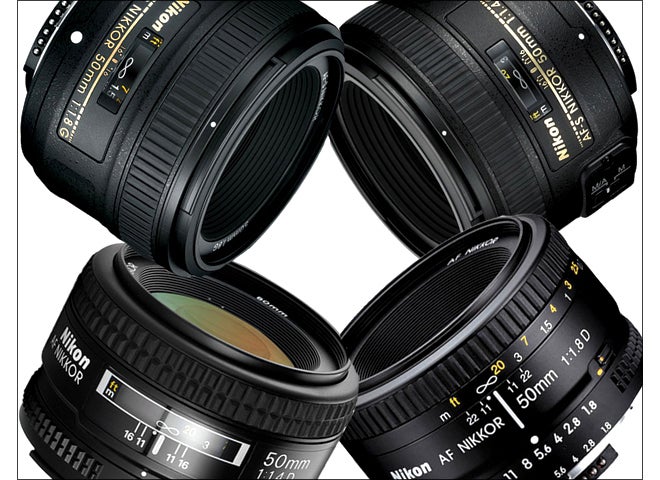 The 50mm prime lens is considered by many photographers to be an absolute staple in any camera bag. Why? They’re usually small, light-weight, and fairly inexpensive despite offering fast apertures. On a full-frame sensor, they offer a field of view that’s true to what your eye sees. Even HDSLR video shooters usually carry one as part of their core kit.

Below we have weighed the pros and cons of each 50, so that you know which one belongs in your bag.

Who Should buy it: Entry-level, Mid-level, prosumer and pro DSLR shooters (D3000-D3), those who want to take full advantage of Nikon’s newest lens technology.

Who should skip it: budget-minded individuals, Those who want to use the lens to shoot video.

Nikon’s most expensive is also its largest and heaviest, primarily because it has more glass elements than its competition. It is also the only lens of the four to offer a 9-blade aperture—which likely means the most pleasing bokeh.

One of the biggest differences between the D- and G-series is that the G-series lenses have built-in Silent Wave Motors. Because the D-series is lacking in that department, it has to rely on the body to drive the AF leaving those with lower-end DSLRs stuck on manual focus indefinitely.

Who Should buy it: Entry-level, Mid-level, prosumer and pro DSLR shooters (D3000-D3), those who want to take full advantage of Nikon’s newest lens technology, but are willing to sacrifice ½ a stop.

Who should skip it: Those who want to use the lens to shoot video, those looking for a lens with a big f/1.4 maximum aperture.

Of the four lenses, this is the only one we have not yet tested, but being the newest of the four definitely has its perks. The 50 f/1.8D lens is the only one to feature an aspherical lens element, which helps to cut down on chomatic aberration, or the weird color fringe that can occur when shooting wide open.

Like its more expensive counterpart, this G-series lens plays nice with all Nikon DSLR’s. So if you are in the market for a 50, and have a D5000-series camera or lower and don’t want to spend an arm and a leg, this is your lens. It is also 3.37 ounces lighter than the 50mm f/1.4G lens and about .1 inches smaller thanks to the fact that it has one less element.

We are very excited to see how the 50mm f/1.8G compares to the 50mm f/1.8D lens in terms of our subjective quality factor test. We will post the results of that as soon as we get the lens in for testing.

Who Should buy it: Those who are passionate about shooting video, those with mid-level or Pro DSLR’s (anyone with a D7000/D90 series or higher).

Who should skip it: Those with entry-level DSLR’s and prosumers DSLR’s (D5000 series or lower).

While the optical design of this lens dates back to the late 70’s (this model came out in 1995 and is Nikon’s oldest lens still in production), there is a reason Nikon keeps this little guy in its lineup—it is truly a do-it-all lens. In fact, referring to it as “the Video Lens,” is somewhat unfair considering it does video and SO much more. However of the four, this is hands-down the one to go with if HDSLR is your thing.

Unlike the newer G-series of lenses, both of Nikon’s D lenses have a stopping point on either end up their focusing range, in which the focusing ring literally will not turn anymore (the focus ring on the G-series will continue to turn). Also, both of the D-series of lenses offer aperture rings, which comes in handy when you’re switched over to video mode. Plus, the focus ring motion is as smooth as can be.

In terms of still photography, our subjective quality factor test reveals that the 50mm f/1.4D is actually sharper throughout every aperture compared to the 50mm f/1.4G lens, although both scored a rating of A+ at all apertures at a size of 8×10 or smaller. And while it has fewer elements, and a less advanced coating than the G-series lens, sharpness is king when it comes to glass.

It should also be noted that from our testing, Nikon 50 D-series lenses that use the camera’s motor to focus, consistently autofocus approximately .1 seconds faster than the G-series lenses that utilize a built-in Silent Wave Motor. Again, not a huge difference, but it is food for thought.

Who Should buy it: Those with mid-level or Pro DSLR’s (anyone with a D7000/D90 series or higher), budget-minded individuals, those who are willing to sacrifice ½ a stop. .

Who should skip it: Those with entry-level DSLR’s and prosumers DSLR’s (D5000 series or lower).

Just because the 50mm f/1.8D lens is Nikon’s cheapest, doesn’t mean by any means that it is its worst.In fact this is the only 50 of the four to stop down to f/22—the other three go to f/16.

Like the 50mm f/1.4D lens, this one is also based off an older model, although not one from the 70’s. Our SQF’s reveal that it is fairly comparable in terms of sharpness to the 50mm f/1.4D lens—at a size of 5×7 it scored an A+ rating at all apertures. However at 11×14, it dipped into the A range at f/1.8 and f/2.8. The larger the print size after 11×14, the more the disparity between the two D-series lenses increases.

While video is possible with this lens, we really wouldn’t recommend it. The 50 1/.8D is essentially high-end Nikkor optics, in a cheaper-quality plastic housing. While this results in it being the lightest of the four lenses, it also means it has scratchy manual focusing.

Like its D-series counterpart, this lenses biggest negative is it only works with the higher end cameras. However, if you have a D90, D7000, D300, D300s, D700, D3, D3x or D3s and are looking for the most bang-for-your-buck, look no further than this little guy.