Need a lot of storage in a hurry? This two-drive beast has you covered. 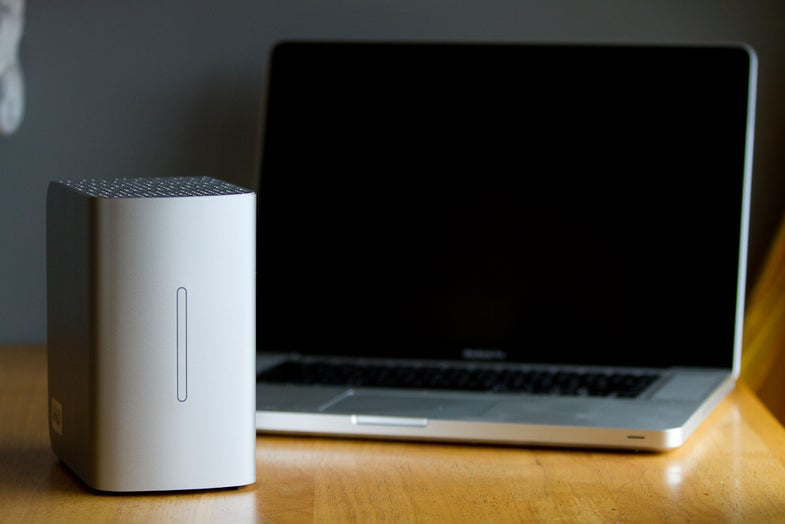 Confession: I’m a total digital hoarder. My iTunes collection is littered with songs I don’t even like, and I can’t bring myself to delete nearly as many photos as I should. Because of this, I require massive amounts of storage space. So, when Western Digital bumped their My Book Studio II drives to 6 TB, I was intrigued. For the past week I’ve been moving files around on it to see if it lives up to its $549 price.

The Drives
The cavernous 6 TB capacity is made up of two 3 TB WD hard drives. It ships in a RAID 0 configuration, which gives you the full amount of storage and the fastest operation. While it worked fine with both a PC and a Mac right out of the box, the true advantage of a two-drive system like this is in the RAID 1 configuration. It cuts your storage in half, but keeps two identical copies of your data in case one of the drives should fail. The RAID 1 format left about 2.74 TB of space, still plenty even for large photo collections.

Interfaces
You have a choice of four interfaces for transferring data: USB 2.0, eSATA, and FireWire in both the 400 and 800 flavors . Wires for each are included in the box, except eSATA.

Build
Despite its metallic appearance, the case is actually plastic. That’s not necessarily a downside, since it’s a desktop drive and dropping it would be a bad scene regardless of the case material. The only button is the power button on the back and a flashing light on the front of the drive lets you know things are turning inside. Popping the top to gain access to the drive compartment is also pretty simple, which is nice, even if you don’t plan on doing a ton of swapping. And thanks to the huge number of vents, the whole package stays cool to the touch, even under heavy load.

Performance
To check out the transfer speeds, I took a 4.07 GB folder full of Raw images — about the size of a CF card full of files— and transferred it back and forth a few times. Here are the average results:

Predictably, the Firewire 800 connection was much faster, helping it achieve numbers that were very in line with my expectations. However, I couldn’t help but wish the Studio II was able to take advantage of the new Thunderbolt port on the MacBook Pro. Even a USB 3.0 connection would have been a welcome addition. For a set-up with this much space and the ability to swap drives pretty simply, a little future-proofing would have been nice.

Software
There isn’t a lot of software packed in with the Studio II, and some of the programs come in trial form. It’s a standard, if somewhat annoying, practice in the external hard drive space. The Backup Anywhere service is nice, but a little redundant if you’re already using Time Machine on a Mac. The actual drive manager is fairly straightforward, though, making things like formatting and switching RAID configurations very simple.

Verdict:
If you need a lot of simple storage, quickly, this is certainly a great option. You don’t get any of the access advantages you get from a network drive, but that means you also don’t have to deal with any of the complicated network setup issues. At $549, I would have liked a USB 3.0, but it’s still $150 cheaper than a similar drive from Lacie. Just be careful if you decide to use it as a rest for your drink. All those vent holes won’t do much to keep out a torrent of spilled coffee.