There's no real official way to get images and videos from your CF cards to your shiny Apple tablet, but for another $30, you'll gain the ability as well as another dongle for your bag. 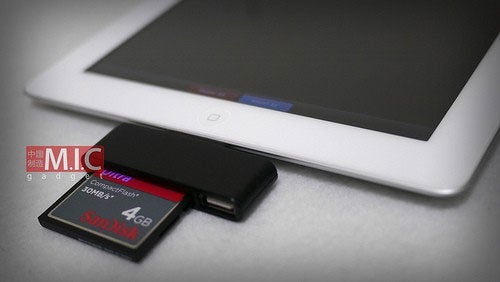 There were some disappointed people when Apple announced the iPad 2 and the often-requested SD card slot was still MIA. SD shooters could still go back and order one of Apple’s Camera Connection kits, leaving CF shooters out in the cold. But, a company called MIC Gadget will soon be offering a CF-reading dongle for $30.

The need for a dedicated CF reader stems from the fact that the USB attachment sanctioned by Apple doesn’t have enough power to support a plugged-in card reader. But, MIC says their attachment will allow users to move photos and videos directly onto their iPads without a fuss.

The initial report came from Engadget, who claim the iPad won’t actually play back HD video captured from a 5D Mark II. Raw compatibility is also something of a question mark, making the whole thing seem like a pull on a $30 photographic slot machine, at least until other online guinea pigs buy them and report on compatibility.

If you want a simpler, but more expensive solution, you can always check out apps like Shuttersnitch, which pairs to wireless file transmitters (like the $600 and up Canon WFTs or the $700 Nikon WT-4A) and displays images on the iPad as they come into the camera like you would get shooting tethered to a laptop. It’s worth noting that it also works with Eye-Fi cards, which might be a more elegant solution than the Camera Connection Kit even for SD shooters.