The next generation of Micro Four Thirds from Olympus gives the competition a lot to live up to. We've taken the latest PEN into the lab to see what's new and what's improved in this successor to the revolutionary E-P1 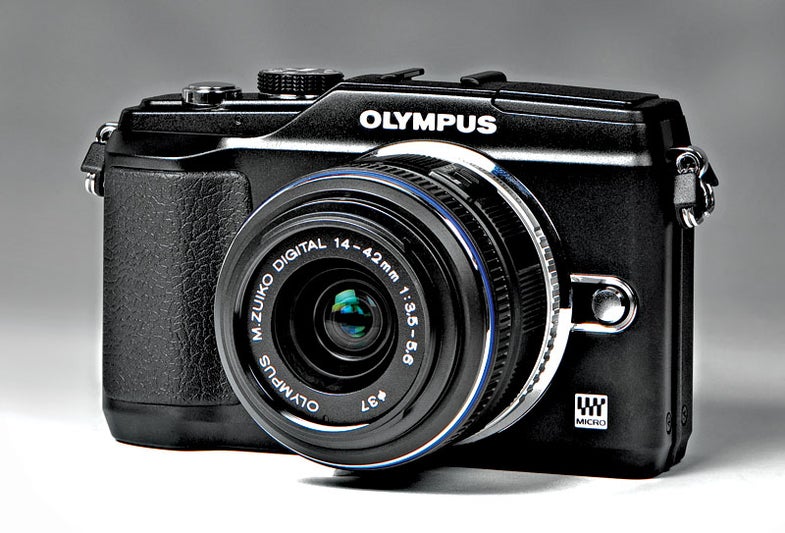 If the original Olympus Pen E-P1 started a revolution, the new Pen E-PL2 demonstrates evolution. This fourth of the company’s range finder-look Micro Four Thirds interchangeable-lens compacts (ILCs) is a bit sharper, a little more sensitive, quieter, and easier-handling than its immediate predecessor, the E-PL1. In short, it’s further evidence that this type of camera is here to stay.

In the Lab
In the Popular Photography Test Lab, the E-PL2 produced more resolving power than the E-PL1, at the expense of slightly more noise at higher ISOs. But then the sensitivity scale has been shifted upward, with the E-PL2 starting at ISO 200 instead of ISO 100 and topping out at ISO 6400 rather than ISO 3200.

Though its top sensitivity comes with more noise, the casual shooting that this camera is made for generally brings with it more tolerance for noise. Furthermore, the f/3.5-5.6 kit lens will benefit more from the availability of ISO 6400 than it will from ISO 100. Resolution earned an Extremely High rating by edging into the lower end of our range for that score, with 2260 lines per picture height at ISO 200. At ISO 1600, the camera retained almost all of that resolving power, turning in 2240 lines. After that point, though, resolution falls off more significantly. At the camera’s top sensitivity of ISO 6400, it achieved 2010 lines in our test.

Color accuracy easily scored an Excellent rating with an average Delta E of 6.6 for an 8-bit TIFF, well below our cutoff of 8 for top honors in this test.

Noise proved lower than the E-PL1 at ISO 200 through ISO 800. But the older camera fared better at ISO 1600 and ISO 3200. In both cases, though, the difference was marginal, so you could turn noise reduction up from the default and bring the E-PL2 in line with its predecessor, without sacrificing much more resolution.

These test performances combine for an overall Image Quality rating of Extremely High from ISO 200 through ISO 800 for the E-PL2.

In the Field
The E-PL2 carries forward a very similar design to the E-PL1. Its rangefinder-inspired design has a nice, though small, grip protruding from the front. This time, Olympus has laid textured rubber over that grip, which goes a long way to making the E-PL2 more comfortable to hold than its forebear. On the back of the camera, a ridge runs above, below, and on the left side of the video button. This is welcome, since the same button on the E-PL1 was prone to accidental presses, especially if you wore the camera around your neck.

Olympus also added a scroll wheel to the back of the E-PL2 instead of the group of navigation buttons found on the E-PL1. Essentially the same as the wheel on the Pen E-P2, it provides a quick way to scroll through settings, such as scene modes and Olympus’s Art Filters, as well as a fast way to change shutter speeds or apertures. In our eld tests, we ended up switching a lot between using the E-PL2 handheld and mounting it on a Joby Gorillapod for long shutter speeds. The scroll wheel really came in handy when switching to lower ISOs and smaller apertures to force long shutter speeds when shooting things like the Ferris wheel in the Toys “R” Us Times Square store. While shooting in the American Museum of Natural History, it made quick work of experimenting with different white-balance presets to compensate for the varied and unusual lighting.

The LCD screen has been upgraded to 3 inches and 460,000 dots, double the dots of E-PL1’s 2.7-incher. It’s certainly nicer for playing back your images, but also made manual focusing a little easier and video recording a more enjoyable experience.

Video, while still capped at 720p at 30 fps and up to 7 minutes, benefits from a new lens design. The new kit lens has been reconfigured to ensure that the focusing motor won’t intrude upon the sound you record with the camera’s built-in mono microphone.

And the E-PL2’s contrast AF is the best we’ve seen from Olympus yet. In bright light, it focuses fast, though as with all contrastdetection systems we’ve used, it becomes noticeably slower as the light dims. When taking a picture of the replica of a blue whale in the natural history museum, we had a hard time locking focus because its monotone body, combined with the very dim lighting, didn’t produce enough contrast for the camera to detect. We worked around this by focusing on the bottom of the whale’s body, contrasted with the white wall behind it.

We wouldn’t really hold this against the E-PL2, since none of its competitors would be able to handle this extreme situation either. But it’s worth noting that we’ve been able to lock focus on that whale with DSLRs in exactly the same lighting situation. For beginners moving up to interchangeable-lens cameras for the first time, Olympus includes its Live Guide shooting mode. Introduced in the E-PL1, it’s a nice way to ease novice shooters into making adjustments to shutter speed, aperture, and other controls. Written in very plain language, it lets users choose between making exposures brighter or darker, and achieving deeper or shallower depth of field.

The Bottom Line
In our opinion, the E-PL2 is one of the better ILCs on the market. It takes advantage of the now-wide array of lenses available for the Micro Four Thirds system while offering a compact and powerful body with the best features that Olympus has developed for this still-young format.

Its only real direct competition is Panasonic’s Lumix DMC-GF2, which we will be testing soon for an upcoming issue. That makes comparisons difficult, as Panasonic’s other ILCs all resemble small DSLRs. The closest in price is Panasonic’s G2 ($510, street, with 14-42mm f/3.5-5.6 kit lens), which just barely trailed the E-PL2 in resolution. And since Panasonic doesn’t apply much in the way of noise reduction in its RAW processor, it was much noisier in our test than the E-PL2. Again, you can adjust noise reduction to your liking, but the less-advanced shooters that these models cater to aren’t likely to fiddle much with such things, and will probably like the smaller design of the E-PL2 and GF2.

If you’re in the market for a modestly priced Micro Four Thirds body, the E-PL2 is certainly very appealing, whether you’re moving up from a compact—or if your DSLR is giving you a backache. With its kit zoom, battery, and memory card, the E-PL2 weighs barely a pound. Supplement this rig with the 40-150mm f/4-5.6 ($300, street) lens and you’ll add less than half a pound to your bag, and gain the equivalent coverage of 28-300mm in 35mm format, enough for the vast majority of shooting situations.

We’re eager to see how the Panasonic GF2 fares in our lab tests, but so far it has a lot to live up to.