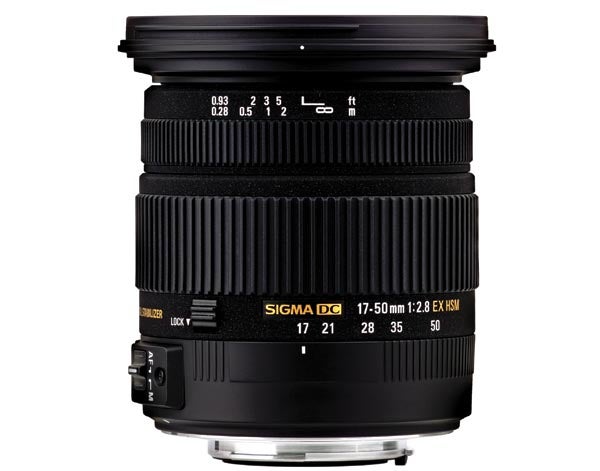 Digital-only speedsters in the 16–55mm range are at home in the Canon, Nikon, Pentax, and Tamron catalogs. All offer fast f/2.8 constant apertures and image stabilization (except for the Pentax, which puts IS in the camera). Now Sigma joins them with this 17–50mm OS ($670, street), its first high-speed, stabilized, wide-angle zoom made for APS-C bodies.

One of the smallest and lightest of its class, this Sigma, without a hood, casts no shadow when used with a built-in pop-up flash. Handsome with matte-black finish and gold accents, its well-ribbed, amply sized zoom and focusing rings have nicely damped turning actions behind a nonrotating front element.

Subject distance scales with tightly spaced numerals are fairly useless, and the manual-focusing ring’s 50-degree turning radius made MF rapid but coarse—it’s the narrowest we’ve seen in this class (the average is around 75 degrees). We liked the near-silent AF.

In our Test Lab, the Sigma produced Excellent-range SQF scores, with superior sharpness and contrast—comparable to the Tamron, but slightly below the Canon, Nikon, and Pentax.

Distortion control and edge falloff were first-class; ditto for the close-up performance, which allowed for the greatest maximum subject magnification (1:3.87) of any comparable zoom we’ve tested recently.

Conversely, however, its OS system produced only 1–2.5 stops of extra handheld sharpness for three testers. No one on our panel got near Sigma’s claimed 4 stops. A 25.5–75mm equivalent on most APS-C bodies, this lens compensates with its OS, f/2.8, small size, and silent AF. As a short complement to Sigma’s 50–150mm f/2.8 DC, it’s sure to find many fans among wedding and event shooters.