We compare Canon's G12, Panasonic's LX5 and the Nikon's P7000 in real-life situations. 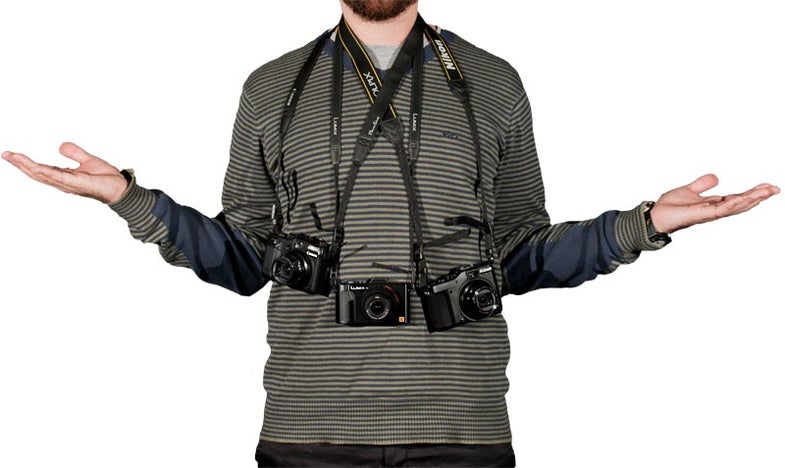 We spent some time with three of the hottest high-end compacts currently available, the Canon G12, the Nikon P7000 and the Panasonic LX5. The goal? To test out the capabilities of each by shooting all three, side by side, in similar situations.

So why the G12, LX5 and P7000? All three cameras cost between $420 and $499, all three cameras feature a 10 megapixel sensor (LX5 and P7000 are 10.1), and all three have a similar sensor size (the G12 and P7000 feature a 1/1.7” sensor, the LX5 features a 1×1.63” sensor). Not to mention the fact that they all feature professional features like RAW capture, a hotshoe,optical image stabilization and full manual settings not found on most other compacts.

Sure there are a few differences, like the LX5 is somewhat smaller because it doesn’t feature an optical viewfinder (although the optional DMW-LVF-1 hotshoe EVF is available for about $130) and the G12 shoots higher-res video than the other two, but essentially the three are equivalent in terms of what they offer.

The Comparison: It should be noted that before we started shooting these sample images, all three cameras were reset to their factory specifications. The images were all shot as jpgs in the SRGB color space. The cameras were also all tripod-mounted, and samples images were taken one right after another for each camera. All images were shot on Auto white balance and on either aperture priority mode or manual exposure mode.

Due to differences in focal length, not all comparison images are exactly the same. These images are not meant for scientific testing purposes but to give a general idea of how each camera performs in various conditions. Stay tuned for full-blown tests on each of these compacts.

Built-in viewfinders are becoming harder and harder to find in compacts. The fact that the P7000 has a viewfinder is a nice touch, although it is fairly inaccurate (80% coverage) and does add extra size to the body.

Dislike: Of the three cameras compared, we found the controls on the Nikon P7000 to be the least intuitive. Even after spending some significant time out and about with the camera, we still found ourselves frustrated and stumbling to change basic settings like the shutter speed and aperture. Obviously with some practice, this may be less of an issue.

Other issues we ran into while shooting with the P7000 include the fact that one needs to manually switch the camera to macro mode in order to take a close-up (on the G12, macro mode automatically engages when the camera senses you are close to a subject). We also weren’t terribly impressed with the “quick menu dial,” used to change things like the white balance, ISO and quality. The setup makes it difficult to change these settings on the fly as the camera interrupts the LCD image to bring up a separate menu for each.

Overall: The P7000 offers high-end features and solid image quality in a convenient package. Unfortunately the controls on this camera are its biggest downfall. It would make sense for companies like Nikon to make the controls on their high-end compacts similar to those on their DSLR’s—allowing users to easily switch back and forth.

On the aesthetic side, of the three compared, the P7000 feels the most bulky and is the heaviest. Unlike the G12, its body is made up of harsh lines and contours. It’s also definitely not going to fit in the average pocket.

It should also be noted that the P7000 is Nikon’s first attempt at a high-end compact on the same level as the G12 and LX5—keep in mind that the Canon G12 is an update to the G11 and the LX5 is an update to the LX3. Considering that the P7000 was pretty much built from the ground up, we feel that Nikon did a solid job creating a professional-level compact that holds its own against the well-seasoned competition.

Canon G12:
Like: We are big fans of the articulated screen on the Canon G12. Despite having the smallest LCD of the three camera compared (2.8″), the versatility of the screen more than makes up for those two measly tenths of an inch. The G12 is also by far the most solid feeling of the three cameras. While the camera itself is only a bit smaller, dimension-wise, than the P7000, Canon did a good job of rounding the camera down to seem a whole lot more compact than it really is. The G12 also feels far more rugged and tough than the other two compacts.

Like the P7000, the G12’s image quality seems to be quite solid for a compact (although our lab test will ultimately decide just how good it is). Its sensor, like the P7000 is also 1/1.7”. We also found the G12 to do particularly well at getting an accurate light-meter reading when set to evaluative metering on aperture priority mode, regardless of the shooting situation.

The layout and controls of the Canon G12 were the most intuitive of the three camera compared, although there is certainly room for improvement. The ISO and shooting mode dials are really conveniently located and unlike the P7000, the exposure compensation dial is located on top of the left side of the camera—a more sensible place. The shutter on the G12 was the snappiest and most solid-feeling of the three.

Dislike: Lenses on compact cameras that close on their own when the camera is turned off make us nervous, as the tiny shades that protect the lens have a tendency of getting jammed or stuck—especially if the camera is bumped around too much. Panasonic made this a non-issue with the LX5 by simply opting to give it a lens cap. Both Canon and Nikon should consider this. We would rather loose a ten-dollar lens cap than jam the lens of a $500 camera.

**Overall: **Canon’s G12 is an impressive little camera and more than likely will offer users the best overall shooting experience of the three compared. Its articulating screen, rugged design and intuitive controls, coupled with its solid shooting capabilities make it clear that the extra time and refinement Canon has been able to put into the G series have made it a well-thought-out workhorse and a winner. Now if they could just make it a bit smaller…

Panasonic LX5:
Like: The LX5 definitely takes the cake in the sleek and sexy category. It is by far the smallest and lightest of the three compared, coming in more than 4 ounces lighter than the other two. Its thin body makes it a pleasure to carry around. In fact, the LX5 is truly a master of disguise with its ability to look like any other point and shoot despite the fact that it has full manual controls and RAW capabilities.

Before we discuss what’s great about the LX5, lets talk about its f/2 Leica lens. Sure the G12 and P7000 offer apertures of f/2.8, but in the world or low-light photography, the difference between using an f/2 lens and an f/2.8 is literally night and day (get it?!). We were also big fans of the feature that displays equivalent focal lengths as one zooms in and out—something that is absent on both the P7000 and the G12.

Our favorite feature by far of the LX5 is the aspect ratio toggle switch on the lens. You can switch between a 1:1, 4:3, 3:2 and 16:9 ratios simply by throwing the switch one direction or another. The controls on the LX5 are fairly intuitive, although the buttons on the back are poorly marked and can make toggling setting extremely cumbersome, especially in low light situations.

Dislike: Of the three cameras compared, the LX5 gets the “most likely to slip out of your hand” award. Sure there is a small rubber grip on front of the camera, but Panasonic went ahead and made the camera so sleek and sexy that it is actually a little bit slippery. Also, adding some rubber to the back would help a lot.

We also wanted to mention that we are not terribly big fans of the AVCHD lite video codec that the LX5 uses. We have found it to be particularly irritating to work with, especially on Mac.

Overall: The LX5 is packs a huge punch in a very small package and features all sorts of cool extras not found in similar compacts. While the G12 and P7000 have it beat in the zoom and rugged department, the LX5 is by far the easiest and most convenient to carry around.

Besides, what’s not to like about a camera with an f/2 Leica lens? Sure it doesn’t come branded with the coveted Leica badge, but if you look real close around the lens element, in teeny-tiny letters, it does say Leica. You’ll just have to add your own red dot.

Again our testing will ultimately prove which of the three offers the best image quality, but regardless of which camera does the best, there is always room for improvement. Basically, what we are saying is don’t expect the LX5 to perform like a Leica M9. It won’t.

Late Afternoon Comparison:
We started out by shooting each camera in the late afternoon. All three cameras were set to ISO 400, f/2.8 at 1/80 sec.

Notice the slight variance in color—keep in my mind all three cameras were set to auto white balance. All in all, the three cameras seem to perform similarly under these relatively easy shooting conditions.

Indoor Lighting Comparison:
Next we took a look at how each camera would handle a room lit by a single incandescent bulb. Each camera was set to aperture priority mode ISO 800, f/4. The shutter speed on the G12 was 1/8 sec, on the LX5 is was 1/10 sec and on the P700 it was 1/7 sec.

While the exposures are all accurate, we do see a bit of difference in terms of the white balance for each of the cameras. The P7000 specifically seems to be rendering the image far cooler than the G12 and LX5. The LX5 seems a bit on the warm side.

You will also notice, that even at ISO 800, we are beginning to see some undesirable noise from each of the cameras.

ISO Comparison:
To illustrate each camera’s ISO range, we set them to aperture priority mode at f/4 and shot the same basement scene while varying the ISO.

It should be noted that the P7000 features a High-1 ISO mode above ISO 3200 and that the LX5’s ISO maxes out at 12800. However we opted to draw the line for our high ISO comparison at 3200 for two reasons. First, because the G12 maxes out at ISO 3200 and second, because it is highly unlikely anyone would be shooting at an ISO higher than 3200 on any of these compacts due to the noise levels.

Aperture Comparison:
Again we set each camera to aperture priority with an ISO of 200.

Each of the cameras features a fairly similar aperture range. Both the P7000 and G12 have a range of f/2.8 to f/8 while the LX5 has a range of f/2 to f/8. To really see the differences in each image, open the full-resolution version