Why Sensor Size Changes the Angle of View 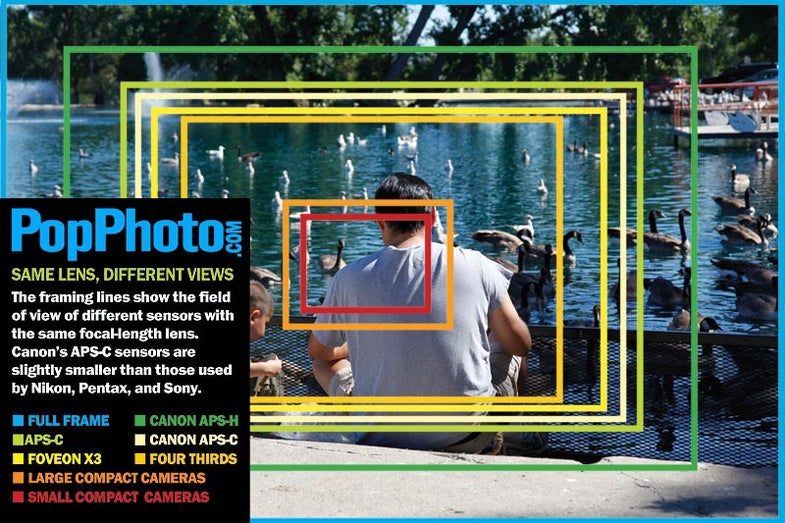 The frames show the fields of view you'd get with different-sized digital sensors, using the same focal length. Smaller sensors take in less of the image circle, and hence record a narrower field of view. So lenses for smaller sensors are designed to project smaller circles. That's why you can't use a "digital-only" lens on a full-frame DSLR—the image circle would be too narrow for the sensor. Peter Kolonia
SHARE

Imagine putting the same focal-length lens on eight different kinds of cameras. Position each camera in the exact same place, at the same height, aimed at exactly the same spot. Would the pictures from each camera show the same scene?

Not if they used sensors with different physical dimensions. Depending on the size of the sensor, from a full-frame DSLR down to a pocket compact (we didn’t bother with cell phones), you would get the progressively smaller framings superimposed on the photo at left. Why? As the sensors get smaller, they take in less of the image projected onto them by the lens, as shown in the diagram above.

For this reason, the photo industry has adopted equivalencies to relate all these different angles of view to a single reference standard: the 35mm film frame, whose dimensions of 24x36mm are also those of the full-frame digital sensor.

Our photo was taken with a full-frame Canon DSLR with a zoom at 85mm; a Canon APS-C DSLR at the same focal length would provide the full-frame equivalent of about a 135mm lens.

You can use a multiplier called lens factor or crop factor to determine equivalencies—particularly convenient for interchangeable-lens systems. Multiply the stated focal length of your lens by these figures to get the full-frame equivalent: APS-H (now, just the Canon EOS-1D Mark IV), it’s 1.3X; for non-Canon APS-C, 1.5X; Canon APS-C, 1.6X; Sigma’s Foveon sensors, 1.7X, and Four Thirds, 2X.

So, with smaller and smaller sensors, you need progressively wider-angle lenses to maintain the full-frame equivalent.

Confusing? A better way would be to state the angle of view lenses project on a given format, which would require no translation into an “equivalent.” An ultrawide would give you a greater than 85-degree angle of view; a “normal” lens, around 40 degrees. Superteles would be those that give you single-digit angles of view. Unfortunately, nobody describes them that way.