Shooting the US Open with an Olympus E-PL1 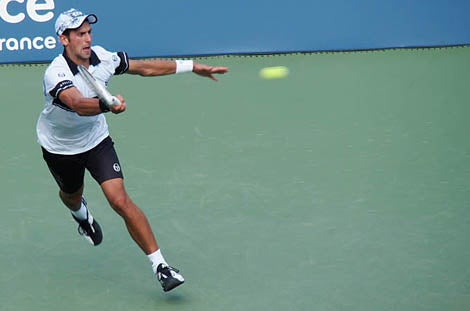 During the first round of the 2010 US Open tennis tournament, Olympus invited a select group of journalists to shoot with their E-PL1 Micro Four Thirds camera. I was there and while I didn’t get to grab shots of any fistfights (those didn’t happen until a couple of days later), I did manage to capture some shots of the action in Arthur Ashe stadium.

One thing to remember when shooting tennis is to keep your shutter speed fast. Those racquets and balls move extremely fast, so you shouldn’t really dip below 1/500 second even if you have to bump up the ISO.

To keep your shutter fast without too much noise, you’ll also want to set as wide an aperture as you can. Not only will this isolate your subject from the background, it’ll also let more light through the lens to keep those ISO’s down. I was shooting mostly with Olympus’s new 9-18mm f/4-5.6 and 14-150mm f/4-5.6 Micro Four Thirds lenses, so I ended up with a lot of shots at f/5.6. It’s not as large an aperture as one might normally use for tennis, but the constraint was a welcome challenge and a chance to see how these new lenses perform in the field.

The lenses focused surprisingly fast. This is likely partly because of the new internal focusing design they share, having been designed to focus rapidly and silently during video capture. Indeed, there was little to no vibration or sound made when focusing. The E-PL1 wasn’t made to keep up with high speed tennis action, even in continuous AF mode, but in single focus situations it was able to lock on and get a lot of shots even when the subject had just run into position to hit the ball. In fact, it was often so fast that I could pre-focus when the player ran into position and then wait for the right moment to trip the shutter so that the ball was in frame when the player was hitting it. This wasn’t the case with the 300mm f/2.8 Four Thirds lens mounted on the PL1 with the help of an MMF-2 Four Thirds to Micro Four Thirds adapter. While its autofocus couldn’t keep up with the action, it provided a nice clear view, complete with a pleasantly defocused background, in situations where there was ample time for prefocusing, meaning not very often.

Metering can be tricky in tennis, though the court surface itself can often be very near neutral (in terms of its luminance) and at the very least can be a reference point to find a proper exposure by checking it against a histogram. However, Olympus‚s Digital ESP metering, which uses 324 areas of the sensor together to determine the exposure, did a great job of finding the right exposure in this situation. I relied on it most of the time and used exposure compensation to nudge it in one or another direction depending on variances in backgrounds and lighting.

One last thing to remember when shooting tennis is that you should expect to crop your images, sometimes heavily, after you’re done. Since the players move around so quickly and unpredictably, it’s best to frame wider than you normally would so that you’ll catch everything you’d want to within the frame and then fit it to the best possible framing later. If you’re tempted to call this cheating, then go ahead and try to shoot a match without any cropping and you’ll quickly learn why cropping is such a valuable tool.

See the slideshow of images for more tips and to see what you can get when shooting tennis, from very ideal locations, with the Olympus Pen E-PL1. And note: all the images in that slideshow are JPEGs from the camera (not RAW images) and, other than cropping, have only had minor exposure adjustments made in Adobe Photoshop CS3.

cameras
How to
Shooting
Sports
Tennis