Two super-zooms, a normal-tele zoom and a super-fast prime round out the list. 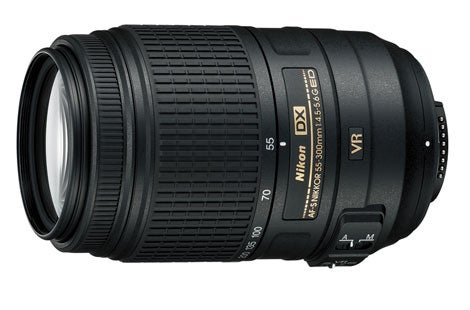 The VR II’s image stablization abilities will come in very handy, especially if you plan on shooting at longer focal lengths without a tripod. Speaking of tripods, the lens includes a nifty “Tripod Detection Mode,” which ensures that image stabilization stays activated and counteracts any small vibrations when mounted.

Like the other four lenses, the DX 55-300mm f/4.5-5.6 utilizes Nikon’s Silent Wave Motor technology. As it is the cheapest in the line-up of new lenses, Nikon is touting it as a great companion to the D3100. We’ll be happy to test that theory as soon as we get our hands on retail units.

An M/A Focus Mode Switch allows shooter to easily toggle between automatic and manual focusing and Internal Focus provides fast and silent performance. And like the DX 55-300mm f/4.5-5.6, the FX 28-300mm f/3.5-5.6 also includes Nikon’s VR II system and a Silent Wave Motor. The estimated street price of this lens is $1049.95.

The f/1.4 aperture offers an incredible ability to separate one’s subject from the background, even in low light. Like the FX 24-120mm f/4, this lens features a manual/auto focus toggle switch, Internal Focus, a Silent Wave Motor and of course Nikon’s Nano Crystal Coating. It joins several other 85mm offerings from Nikon, including the affordable ($400) f/1.8, the already-pricy 85mm f/1.4D IF and the 85mm f/3.5G DX Micro ED VR.

Built to last, this rugged lens comes with a $1699.95 street price tag. This is a serious piece of glass, for serious photographers.