The newest additions to the Alpha line use Sony's Translucent Mirror Technology. 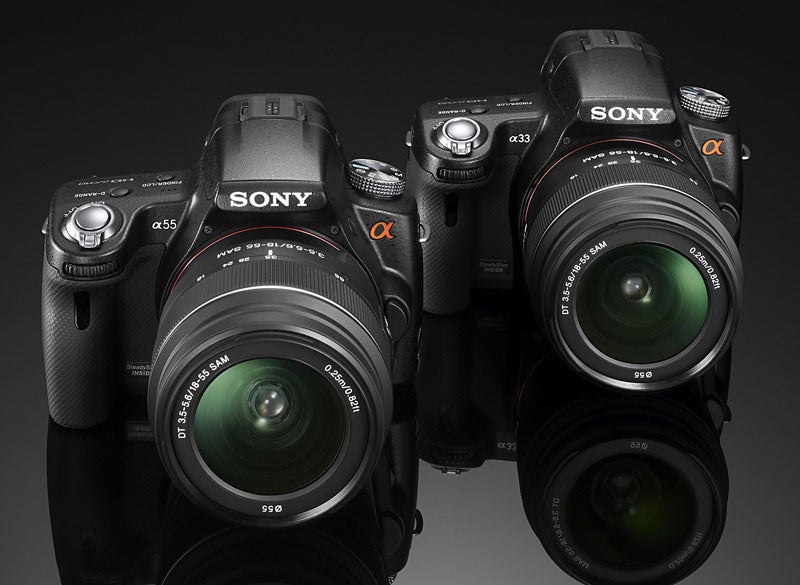 More and more interchangeable lens cameras are going mirrorless these days, but for this pair of cameras, Sony didn’t nix the mirror all together. Instead, they made it fixed and translucent so that it could “split” the optical pathway, directing light to both the main image sensor and the phase detection AF sensor. As a result, shooters get full-time access to phase detection AF using the LCD for Live View or the electronic viewfinder.

Because the mirror is fixed, both the A33 and A55 are more compact than many traditional DSLRs. But, in this case, smaller bodies don’t mean smaller spec sheets. Both new Alpha cams can use the new Exmor APS HD CMOS sensor Sony is so proud of. The 16.2-megapixel A55 is capable of grabbing 10 frames-per-second, while the 14.2-megapixel A33 caps off at 7 fps. Plus, both can capture 1080i HD video (in AVCHD format, of course) using Quick AF, which is a boon for those transitioning from a dedicated video camera.

Shots are composed using either the 1.15 million dot electronic viewfinder with 100% coverage or using the tilting, swiveling 3-inch LCD display for Live View.

Both are also equipped with other Sony staples like their SteadyShot image stablization, their new 3D Sweep Panorama mode and the improved Auto HDR function that’s also found in the new A560 DSLR.

One distinct atvantage the A55 has over the A33, however, is built-in GPS, which makes automatic geotagging of images extremely simple.