This high-speed ultrawide is well-suited for travel. 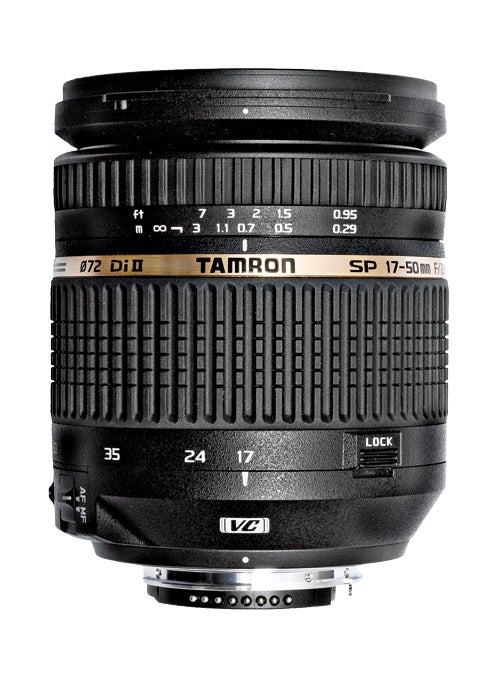 This high-speed digital only ultrawide ($650, street) upgrades Tamron’s nonstabilized 17–50mm f/2.8 ($460, street). Like the earlier lens (which remains in the lineup), this version uses an Extra Refractive (XR) element, two elements of low dispersion, and three of compound aspheric glass—adding up to a remarkably compact yet sharp and mostly distortion-free f/2.8. Vibration Compensation uses Tamron’s triaxial technology, claimed to work on three planes instead of the usual two.

A 26–78mm full-frame equivalent, this lens, like all SP Tamrons, feels solid and ruggedly constructed. Zoom action is slightly stiff, so the lock seems moot. The manual-focus ring is a bit underdamped. AF is fast, accurate and quiet —a big improvement over the earlier version, which we called “whiny” back in 2006.

As usual for a stabilized lens, it’s slightly larger and heavier than the nonstabilized version, though much lighter than Nikon’s somewhat comparable, nonstabilized, 17–35mm f/2.8 full-framer ($1,765, street). And it’s compact enough to cast a shadow from a built-in flash only at the closest distances and widest focal lengths.

On our optical bench, it scored Excellent SQF numbers for sharpness and contrast at three tested focal lengths, with a consistency across the entire aperture range that’s rare in large-aperture glass.

DxO Analyzer 3.2 tests found barrel distortion at 17mm a bit high by today’s standards, though as you zoom out to 50mm it essentially disappears. Another strength? Light falloff: none at 17mm and 24mm, with marginal vignetting gone by f/3.5 at 50mm.

Our stabilization tests found most users can expect to gain 2 stops of handholding. (Tamron predicts 4, but our results are generally more conservative than manufacturers’ specs.)

Well-suited for travel, this fast, compact, stabilized workhorse will shine in low light, with cluttered backgrounds you’d like to defocus, and with active subjects you need to freeze at higher shutter speeds. Best of all? It costs one-half to one-third the price of most f/2.8 ultrawide zooms.