A “jack of all trades” type of lens thats suitable for many different kinds of shooting. 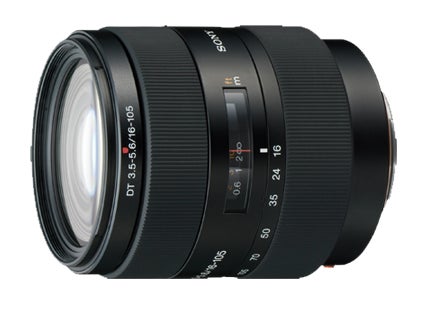 A few years ago a couple of Sony’s engineers from their Japan camera division came and spent the day at our test lab to see how we test cameras and lenses. It was at a time when Sony’s DSLR market was still in its infancy, having only the Alpha 100 and 900 in its DSLR lineup and a few refurbished Minolta lenses with the Sony logo on them. Those engineers told us that day that Sony was planning to go full speed into the DSLR market, and come out with several different cameras and lenses. Well, as we can see today Sony exploded onto the DSLR market with a wide range of different level DSLRs: the Alpha 700, 200, 300 series, etc. And as a result they also produced many new lenses, one of them being the 16-105mm wide range zoom.

It’s unique focal length is wider and longer than its predecessor, the 16-105mm has ED (Extra-low Dispersion) glass that minimizes flare and reduces chromatic aberration. Its 7-blade circular aperture creates a cool defocused effect. The lens seems almost Zeiss-like in appearance, and we had to keep checking for the blue and white Zeiss logo to be certain it wasn’t. It has solid construction and a metal mount, surprising for a DT lens, which are usually all plastic. Average in weight for a standard zoom lens, its quite long when fully zoomed, but nicely compact at its widest focal length. The zoom ring is a little stiff but well damped. The focusing ring is smooth and short. The focusing scale is under a plastic window, with feet marked in orange and meters in white. The orange numbers are a little hard to see as they are cut off a bit on the top because of a slight shadow from the window. The AF was annoyingly whiny (especially so when zoomed out) and slightly jerky­–this lens could have definitely used Sony’s new SAM (smooth autofocus motor).

The Sony 16-105mm is a “jack of all trades” type of lens—suitable for many different kinds of shooting. On the tele end, it’s perfect for bringing distant subjects closer. The wide end is great for shooting scenic landscapes. And in between the two, it’s useful for sports events and portraits. Just don’t use it at, say, a monastery where silence is the norm; its whiny AF will drive any mute monk to forgo his silent vow. But its excellent optics practically ensure you get sharp images, and its compact size guarantees that you will take it everywhere.