Sony's DSLR brings down the cost of high-megapixel, full-frame photography. 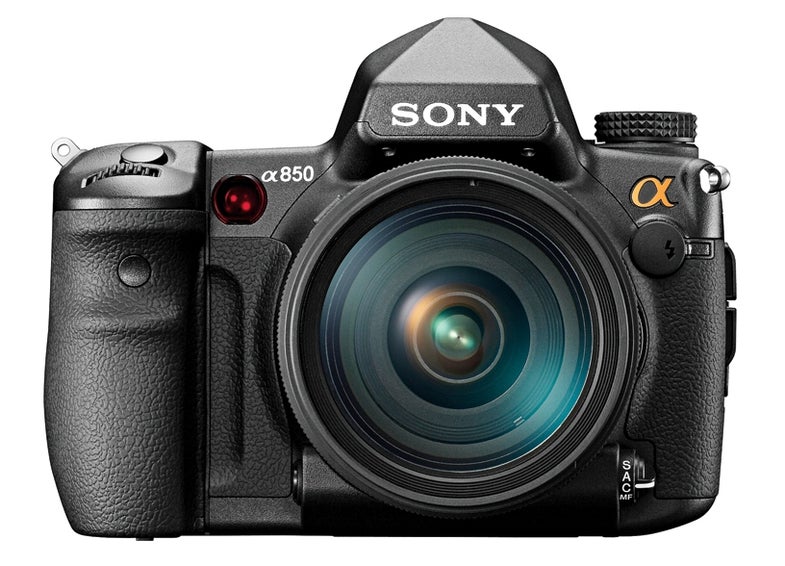 Just a few years ago, a full-frame DSLR would have set you back as much as a late-model used car. Now, Sony is offering its new 24.6MP Alpha 850 for a cool two grand (body only).

And our lab tests revealed image quality close to that of its more expensive sibling, the A900 ($2,700, street, body only). In fact, the A850 scored better on two out of three image-quality factors, although not by a big margin.

Where Costs Were Cut

The biggest real differences between these two cameras come in three areas where Sony compromised to keep the costs down. The most significant of these? Burst speed-3 frames per second for the A850, versus 5 fps for the A900. If you shoot fast-moving subjects, such as sports or wildlife, this could mean the difference between capturing the moment and capturing the moment after.

If you’re a landscape artist or architectural shooter, burst rate might not matter to you, but the next big change, in viewfinder accuracy, probably will. While the downgrading of the A850’s finder to 98% accuracy from 100% on the A900 may seem like a minor change, it can be irksome for those who like to frame their images very precisely-particularly since the A850 lacks live view. Of course, you can always crop later to the composition you wanted, so, given the price difference, we think most shooters could live with this compromise.

And while the A900 comes with a wireless remote trigger, the A850 does not. This may again seem insignificant, but it, too, depends on how you shoot. Macro photographers, for whom any touch of the camera can make a difference in composition and focus, know the value of a remote trigger.

A remote would’ve come in handy in other situations, too. For instance, during field testing, I was trying to make a 5-sec exposure of a train pulling into a station, with about half the exposure elapsing before the train passed into the frame to capture the signs on the opposite platform. Without a remote, I relied on the 2-sec self-timer. In the end, the exposure was a little over a second before the train pulled in, so I didn’t get nearly as much detail in the platform as I’d wanted.

The Alpha 850, which uses the same 24.6MP Exmor CMOS sensor as the one in the Alpha 900, provided some surprises in our lab test results, notably in noise suppression.

The A850 also bested the older camera’s color accuracy, with an average Delta E of 7.7 (Excellent) versus 9.0 (Extremely High).

Conversely, we got slightly lower resolution out of this new camera-although, with a difference of about 100 lines per picture height in a resolution of more than 3,000 lines, it’s not enough to make us complain.

Overall, it’s unlikely that an average viewer would see much of a difference, if any, between equivalent images served up by these two cameras.

But both of those top out at ISO 25,600, and serve up less noise at ISO 6400 than the A850 does at ISO 3200. In the D700’s case, it showed less noise at ISO 12,800 than the A850 did at ISO 6400. So committed low-light shooters would probably be happier with the Canon or Nikon.
All three scored Excellent in color accuracy, with Canon coming out best. In AF speed, the Sony outperformed the Nikon in all but the dimmest light levels, with the Canon trailing both.

The 5D Mark II, however, has full 1920x1080p video recording, while neither the Sony nor Nikon record video at all. The Sony doesn’t even offer live view, instead providing a still preview that displays changes to settings such as exposure compensation and white balance.

Sony seems to have found just the right tradeoffs to create a compelling DSLR. While any of the compromises might make a difference in some situations, together they seem like only minor quirks in the face of the A850’s significant price reduction, big wideangle views, and huge pixel count-in short, a thrilling fullframe experience.

Flash: Supports ADI and TTL autoflash with Alpha flashes; X-sync at 1/250 sec, at 1/200 sec with Super SteadyShot Inside engaged.