A DSLR that makes stepping up simple. 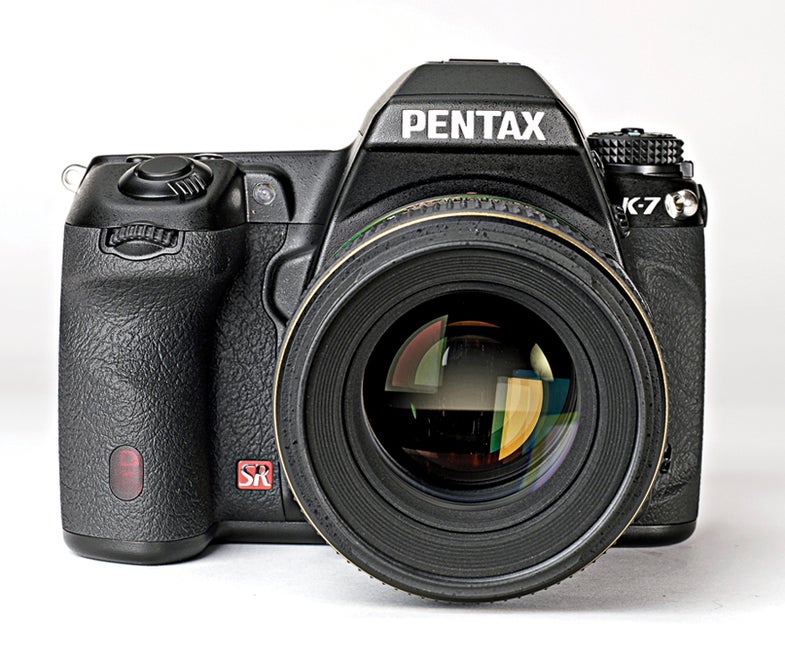 Here’s a ruggedly built, wellsealed DSLR that shoots HD video, processes high-dynamic range (HDR) images in the camera, and has a high-end 100- percent-accurate viewfinder. So why do we have mixed feelings about the Pentax K-7? Because this $1,260 (street, body only) camera is a bit of a mixed bag. The successor to the well-regarded K20D, it doesn’t so much build on the previous model as add a few extensions.

In our lab tests, image quality remained on a par with the K20D’s, with the same tested resolution: 2350 lines. While that’s close to the Canon EOS Rebel T1i ($720, street, body only) and Nikon D90 ($890, street, body only), those competitors beat the K-7’s color accuracy and noise results. Plus, they autofocus faster in middle- and low-level light, and can focus in super-dim light-the K-7 can’t.

For starters, the rugged body: a magnesium-alloy chassis covered in a tough, heavily weathersealed plastic shell. There are gaskets at every seam, and rubber seals on the SD card slot and battery compartment. Pentax says you can use it in temperatures as cold as 14 degrees Fahrenheit; the Canon and Nikon are rated only to 32 degrees.

Then there’s the K-7’s 100% accurate viewfinder, which eliminates having to guess what will end up at the edges of your image. Plus, its 0.92X magnification serves up a nice big view.

Add to that the camera’s sensor-shift image stabilization, which Pentax says now compensates for rotational, in addition to vertical and horizontal, movement. This got us between 2.5 and 3 stops of handholding leeway in our tests, allowing you to get a steady image at 1/20 to 1/13 sec when you would normally need 1/100 sec.

Better yet, the IS system works with any lens you put on the camera. We used an adapter to attach a 1950s 35mm f/4 Takumar lens. While we had to focus manually and compensate for exposure readings when stopping down to smaller apertures, the image stabilization worked fine and we got some nice shots.

And the K-7 is a pleasure to use. It’s got a nice body design, with a solid grip and plenty of switches and buttons for the important functions-though we wish they’d kept the IS switch that was on the K20D. Instead, you have to dig into the menus to engage IS-a step backward.

Action shooters should like the 5.2-frames-per-second bursts for up to 40 full-sized JPEGs, or up to 15 of Pentax’s PEF RAW files or 14 Adobe DNG RAW files. That’s faster than both the Rebel T1i and the D90, though Canon’s EOS 50D ($1,070, street, body only), a closer comparison by price, can shoot at up to 6.3 fps-and it outscored the K-7 in color accuracy, resolution, and noise in our tests.

In real-world shooting, the K-7’s noise performance isn’t as bad as it seems when in our lab test results. That’s because, as a standard, we test RAW images after processing, using the default noise reduction setting in the manufacturer’s RAW converter. While Pentax’s default applies chrominance NR, its converter applies no luminance NR at all, leaving the amount up to you.

Once we applied luminance NR (20 points behind the default chrominance reduction), noise didn’t reach the Unacceptable level until ISO 6400, 2 stops beyond its level in our test. Our noise-taming didn’t affect resolution much until ISO 3200 (2086 lines, versus 2175 lines at the default settings). At lower ISOs, there was some softness to our noise-reduced images, but still plenty of detail.

So, for less noise, use NR for images shot at ISO 800 and above. More importantly, if you don’t shoot RAW, the issue is moot, since Pentax is more aggressive with its in-camera noise reduction for JPEGs.

Contrast-detection autofocus in video is slow, and you can’t manually switch focus points. Ultimately, manual focus was the way to go. The K-7’s other wow feature, in-camera High Dynamic Range imaging, has some limitations.

The K-7 can combine three exposures into a single JPEG (sorry, no RAW) to give you detail in highlight and shadow areas that would be lost in a single shot. Movement can add ghosting, so it works best with stationary subjects and a tripod.

Ultimately, the Pentax K-7 lands in an odd place in the DSLR world. Its got some high-end features, particularly its tough build and terrific viewfinder. But, its sluggish AF in low light and otherwise middling test results don’t scream “Buy me!” If you’ve got Pentax lenses already, the K-7 is a highly competent camera that will let you build on what you have. But, if you’re an experienced photographer who’s starting a DSLR outfit from scratch, you can get more bang for your buck elsewhere.