It’s faster and focuses closer than any comparable kit zoom. 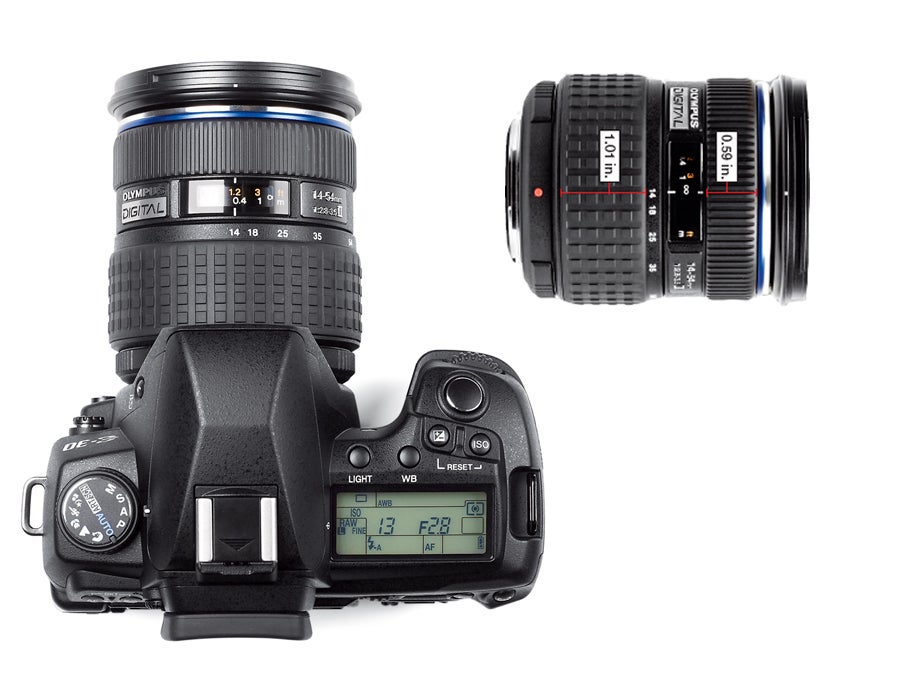 Leave it to Lensmaster Olympus to offer the fastest (and, at $600, street, the priciest) kit lens today— with the closest focusing of any comparable zoom. A step-up option for the E-30, this 28–108mm full-frame equivalent has more reach than Oly’s standard 14– 42mm f/3.5–5.6 kit zoom. And it’s a remake of an earlier lens, with a circular aperture for smoother edges in defocused areas and seals to resist splashes and dust. Three of its 15 internal elements are aspherical.

HANDS ON: About 3.5 inches long when compact, it’s slightly larger than its predecessor—big enough to cast a shadow at close-focusing distances and wide focal lengths when used with the E-30’s pop-up flash. It’s unusually well marked, with large, bright numerals in orange (feet) and white (meters and focal lengths). A blue band echoes the E-30’s accent colors. The ribbed, ample manual focus ring turns smoothly, with no stops at the extremes. The knurled zoom ring is large and adequately damped, if slightly stiff. AF is near-silent, and noticeably faster than the original in live view.

IN THE LAB: Our SQF tests found superior sharpness and contrast— Excellent at all three tested focal lengths. DxO Analyzer 3.0.1 tests showed unusually distortion-free imaging, with Slight barrel distortion at 14mm (0.26%), Imperceptible pincushion at 35mm (0.01%), and Imperceptible barrel at 54mm (0.02%)—the best of any zoom we’ve tested in recent years and much better than the original, which had Visible barreling at 14mm (0.42%).

CONCLUSIONS: By wide-to-moderate tele standards, this lens is a superstar. By kit lens standards, it doesn’t get any better: Sharp and nearly distortion-free, it’s faster and focuses closer than any comparable kit zoom.

That $600 price is steep, especially since it’s not a constant f/2.8. But the variable aperture let Olympus create a true general-purpose utility zoom that’s not only optically superior, but light and compact enough to bring along every day, everywhere.